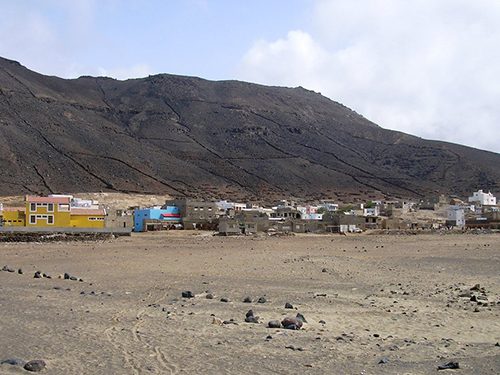 As the nations most responsible for the climate crisis continue to deny and dither, the world’s small island states are fighting hard to save themselves.

One such state is the Republic of Cabo Verde, writes the United Nations Development Programme (UNDP). An archipelago of some 10 volcanic islands located about 500 kilometres off the coast of Mauritania in Western Africa, the country is being hammered by climate change, including widespread drought combined with multiple extreme weather events. In one devastating flash flood last September, “nearly three months of rain fell in 24 hours.”

Perennially impoverished, resource-scarce, and now pandemic-stricken (with 24% of the country’s GDP depending on tourism, COVID-19 has devastated the local economy), Cabo Verde is nonetheless leaning in to the climate fight. As part of its recently updated climate pledge under the Paris climate agreement, the country now aims “to reduce emissions by 18% and source 50% of its electricity from renewable energy like wind and solar power by 2030.”

Similarly on the front lines of both climate action and climate impacts is the island of Mauritius, which saw 17% of its coastline disappear under the force of storm surges between 1967 and 2012. In addition to building a sea wall, Mauritius, located 1,100 kilometres east of Madagascar, has pledged “greater use of renewable energy, and the development of a sustainable transportation system, with the aim of cutting greenhouse gas emissions by 30% by 2030,” UNDP writes.

And then there’s Jamaica, where recurring and prolonged drought is leaving farmers increasingly worried about crop yields. In 2014, a devastating drought led to a 30% decline in yield, which, together with the impacts of brush fires, led to losses of nearly US$1 billion. Yet the country is responding to the climate crisis with “new sustainable farming practices, irrigation, and water harvesting systems” all helping farmers raise their crops even during persistent droughts. The country has also doubled its climate targets, with a particular focus on preserving its still significant forest cover.

Finally, UNDP highlights the island nation of Antigua and Barbuda, located in the so-called “hurricane belt” of the Atlantic. Facing ever-increasing odds of monster storms, the country has “made huge progress in advancing their climate goals,” and is now “proposing a move to 100% renewable energy in the next two decades.”

In a harrowing first-person story for The New York Times, poet and climate activist Bernard Ferguson describes the long-term impacts of Hurricane Dorian on his own island nation of the Bahamas. “Grand Bahama and the Abacos were once covered in dark green foliage that complemented the emerald waters; now long stretches had faded to brown, even grey,” he writes. “Two-storey waves had blown apart wide sections of shoreline. Once-gorgeous mangrove swamps—habitat for algae and crabs and bonefish, and the land’s defence against a storm’s surge—were overwhelmed by Dorian’s salt water, and large swaths of them lay dead, their brittle shells shimmering in the heat.”

Ferguson explains how “doubling wind speed from 75 to 150 miles per hour can equate to 256 times more damage potential” during an extreme hurricane. “While the strongest hurricanes in the Bahamas’ history once topped out at 160-mile-per-hour sustained wind speeds, Dorian’s was 185—a difference that, per the same scale, means more than three times the damage power.”

That “handful of miles per hour,” he adds, is “the difference between tearing down power lines and tearing up concrete.”

In his vivid narrative, Ferguson also brings up a concept that will have critical importance for island states like Cabo Verde, Mauritius, Jamaica, and Antigua and Barbuda. Loss and damage, considered by many to be one of three pillars in the Paris Agreement, “seeks to build support for joint financing, commensurate with different economies’ contributions to climate change, to address all the destruction of resources, homes, ecosystems, and livelihoods that mitigation and adaptation cannot prevent,” he explains.

Since the 2015 Paris conference, some island states and other developing nations have pleaded—largely in vain—for “clear and predictable” finance streams, with Harjeet Singh, a Climate Action Network International senior advisor, telling Ferguson that a recent proposal by some developed countries to tap the Green Climate Fund for loss and damage monies would be to take from a coffer already half-empty.

Noting that actual losses and damage from the climate crisis will run “between $290 billion and $580 billion a year by 2030,” Singh warned that climate finance “is something that really rich countries, particularly the U.S., have made sure there is no progress and not even discussion on.”

Such obstruction, he said, has meant that “money that should have gone to education, health care, infrastructure is now being diverted to emergency response and rehabilitation and reconstruction, which puts developing countries into a vicious cycle of poverty and debt.”

Though U.S. officials like Vice-President Kamala Harris and Secretary of State Antony Blinken called for climate justice during the Leaders’ Summit on Climate hosted by the U.S. in April, Ferguson writes, neither they nor any of the other leaders present explicitly raised the matter of loss and damage funding.