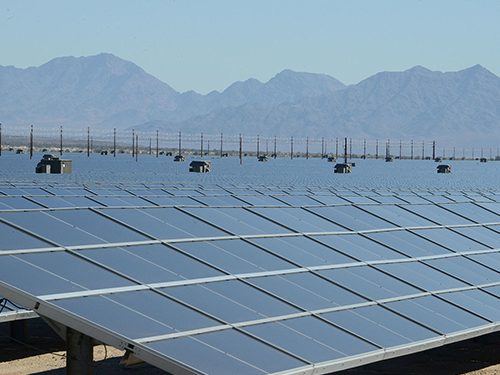 U.S. Department of the Interior/Wikimedia Commons

The California Public Utilities Commission (CPUC) is calling for 11.5 gigawatts of new generating capacity, almost all of it clean, by 2026, a procurement equal to one-fifth to one-third of the power the state consumes.

“The new resources are intended to prepare the state for more extreme weather and help replace the 2.2-GW Diablo Canyon nuclear plant, which will be shuttered by 2025, as well as 3.7 GW of natural gas plants that also are slated to retire soon,” Utility Dive explains.

“It’s an especially significant decision because it’s not primarily intended to boost clean energy, but to ensure that California doesn’t have blackouts,” Grist adds. With a unanimous vote Thursday, the commission “enshrined the plan to bolster its electrical capacity so much with clean energy—like geothermal plants, and solar panels backed up by batteries—that it reduces the risk of its grid going dark.”

“This is a landmark decision. I don’t think it’s hyperbole to describe it as such,” CPUC Commissioner Clifford Rechtschaffen said last week. “This is enough to power about 2.5 million households in the state, and all this will be coming from renewable or zero-emitting resources.”

John White, executive director of the Center for Energy Efficiency and Renewable Technologies, added that the decision finally brings the renewables into the spotlight. “We are now thinking about renewables to meet our needs—not just to check the box,” he said.

Grist says it was clear last summer that California, which likes to tout itself as the world’s fifth-largest economy, was running into the limits of its existing power system. “Last summer, when a heat wave engulfed the region, and air conditioners began gobbling up electricity, demand exceeded the available supply and the people managing the grid had to shut down power to swaths of the state.” By that time, state planners knew Diablo Canyon would (finally) be shutting down, that at least one big gas facility had triggered a full-scale methane disaster, and that mega-utility PG&E had accepted legal responsibility for 84 deaths for the 2018 Camp Fire, the biggest wildfire in state history, which had literally burned Paradise to the ground.

To make matters worse, Grist adds, persistent drought means California won’t be able to count on its hydroelectric plants to supply as much electricity.

“The bottom line is that we need more capacity,” said Stanford University energy economist James Sweeney. “We’ve been running close to the margin for a while now. If you are too close to the margin and you are hit with a heat wave, and a drought—which sounds like California today—you could be in the soup.”

Utility Dive says the CPUC initially issued two versions of its procurement, one of them calling for 500 megawatts of natural gas capacity and the other requiring 1,500 MW. “Both proposals were met with criticism from a variety of parties, including environmental groups who said the state’s modeling didn’t indicate a need for more fossil fuels, and utilities, who didn’t want to be solely responsible for procuring gas,” the industry newsletter states.

“The CPUC revised its first proposal—and scrapped the alternative one—in response to those comments, and regulators now intend to conduct additional analysis over the next few months on the need for fossil fuels.”

CPUC President Marybel Batjer said the state will likely need some fossil resources on standby to ensure grid reliability. “But if we have enough renewable and zero-emissions generation on the system, the fossil fuel resources ideally will not have to run, and just serve as only an insurance policy.”