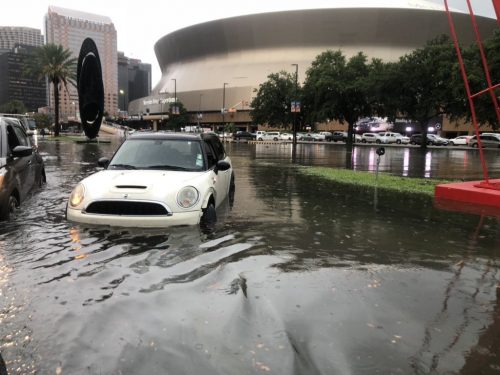 Dangerous climate thresholds that will fundamentally reshape life on Earth “are closer than once thought” and will create unavoidable, dire consequences in the short term, even if humanity gets greenhouse gases under control, according to a leaked draft of an upcoming United Nations science report obtained earlier this week by Agence France-Presse.

The report stresses that the 1.1°C warming the world has already seen is causing serious climatic changes today. Present trends put the Earth on track for at least 3° average warming, but even the UN’s current climate stabilization target of 1.5°C could produce “progressively serious, centuries’ long and, in some cases, irreversible consequences,” AFP writes.

The IPCC warns that “current levels of adaptation will be inadequate to respond to future climate risks,” the possibility of compound, cascading climate impacts and tipping points is poorly understood, but also concludes that “much can be done to avoid worst-case scenarios and prepare for impacts that can no longer be averted,” the news agency says.

But “species extinction, more widespread disease, unliveable heat, ecosystem collapse, cities menaced by rising seas—these and other devastating climate impacts are accelerating and bound to become painfully obvious before a child born today turns 30,” the news story states. And “the choices societies make now will determine whether our species thrives or simply survives as the 21st century unfolds.”

In its own words, the IPCC asserts that “the worst is yet to come, affecting our children’s and grandchildren’s lives much more than our own.” While “life on Earth can recover from a drastic climate shift by evolving into new species and creating new ecosystems,” it adds, “humans cannot.”

The IPCC’s mammoth Sixth Assessment Report is expected in mid-February, too late to directly influence high-stakes negotiations at this year’s UN climate conference in Glasgow, or at separate summits on biodiversity and global food systems. AFP received a draft of the 4,000-page report produced by the IPCC’s Working Group II, dealing with impacts, adaptation, and climate vulnerability.

In a release, the IPCC secretariat says the leak appears to have been based on a version of the report that circulated to governments and experts between early December, 2020 and late January, 2021, adding that it “does not comment on the contents of draft reports while work is still ongoing”. IPCC reports are subject to revision right up to the moment they’re released—sometimes to update the science in the main document, sometimes to accommodate political pressure around the shorter summaries for policy-makers.

The leaked draft of the panel’s latest assessment report “comes at a time of global ‘eco-awakening’ and serves as a reality check against a slew of ill-defined net-zero promises by governments and corporations worldwide,” AFP writes. “The challenges it highlights are systemic, woven into the very fabric of daily life,” and “they are also deeply unfair: those least responsible for global warming will suffer disproportionately, the report makes clear.”

The IPCC analysis also “shows that even as we spew record amounts of greenhouse gases into the atmosphere, we are undermining the capacity of forests and oceans to absorb them, turning our greatest natural allies in the fight against warming into enemies,” the news agency adds. “It warns that previous major climate shocks dramatically altered the environment and wiped out most species, raising the question of whether humanity is sowing the seeds of its own demise.”

AFP’s coverage include summaries of the IPCC’s findings on hunger, drought, and disease, risks to coastal cities, impacts on nature and natural systems, economic impacts, and whether heat waves could be the “next big killer” after COVID-19.