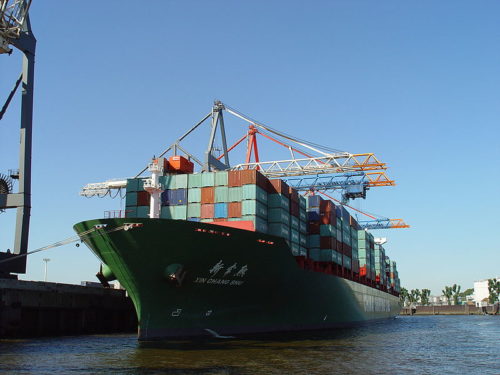 The United Nations and its maritime regulatory agency are facing charges of greenwashing after a key committee adopted a “hopelessly weak” target for ocean-going ships to improve their carbon efficiency.

The plan adopted by the International Maritime Organization (IMO) will only require ships to reduce their carbon intensity by 1.5% per year, Brussels-based Transport & Environment warns in a release—about the same as they would achieve through their own standard business improvements, and far short of the 7% per year required to meet the targets in the Paris climate agreement.

The decision was one of the results of a week-long meeting of the IMO’s Marine Environment Protection Committee (MEPC 76) that ended last Thursday.

“The maritime regulator is greenwashing shipping with a hopelessly weak ship efficiency target,” said T&E Shipping Program Director Faig Abbasov. “The proposal shows total disregard for climate science and is nothing more than a cosmetic measure. Meanwhile, the IMO is meddling in the democratic affairs of the EU by trying to curb its plans to cut ship pollution. This is unacceptable.”

The shipping sector accounts for 13% of the European Union’s transport emissions, and is expected to be brought into the continent’s emissions trading system next month. With that decision on the horizon, the IMO secretariat “expressed disapproval of potential national and regional regulatory measures to address shipping’s growing climate impact where it has failed,” T&E writes.

But despite the IMO’s fail on carbon intensity, the issue still got more attention than another equally serious aspect of the industry’s climate footprint. “During MEPC 76, the IMO and its member states failed to carve out the time urgently needed to develop the rapid action necessary to reduce rising Arctic emissions of a potent climate forcer—black carbon from shipping,” said Clean Arctic Alliance Lead Advisor Sian Prior.

“Black carbon, which is produced when ships burn oil-based fuels including heavy fuels, has a disproportionate impact in the Arctic, and causes increased melt when it settles out of the atmosphere onto snow and ice,” the Alliance explains.

The MEPC’s response was similarly unhelpful when two small island states, the Marshall Islands and Solomon Islands, proposed a US$100-per-tonne tax on bunker fuels during the meeting. “Major emerging economies mainly opposed the measure and the principle of a carbon tax, while European countries backed carbon pricing in some form but did not endorse the specific proposal,” Climate Home News reports. “The U.S. was neutral on the topic.”

Tonga was the one country that directly supported the proposal, calling it “the only measure so far proposed which can achieve 1.5°C alignment and an equitable transition” to a decarbonized future.

“There is clearly division at IMO as to those who are prepared to proactively move forward and those who prefer to delay at all costs,” Marshallese ambassador Albon Ishoda told Climate Home. “The science is clear that $100 per tonne is the minimal floor, not the ceiling, needed now to send a clear unequivocal signal to market.”

“If the global shipping industry were a country, it would be the world’s sixth biggest emitter of greenhouse gases,” said Seas at Risk Senior Policy Advisor John Maggs. But with some countries adopting more ambitious carbon targets ahead of this year’s United Nations climate conference, COP 26, the IMO “has adopted measures that will do little or nothing to address how the climate crisis is causing chaos—in the Arctic, for small island states, and around the world.”

“This week was the IMO’s last chance before COP 26 in Glasgow convenes to show that its deliberations and decisions on the climate impacts from shipping—CO2 and black carbon—have any relevance to meeting the goals of the Paris Agreement,” Prior agreed. With the next MEPC meeting in November due to overlap with the COP, she added, “it is now necessary that the IMO put in place strict, ambitious plans to limit black carbon emissions—proportional to the scale of the climate crisis—and it must do this at the next opportunity.”

The shipping industry was just as frustrated. “While shipping groups welcomed the IMO opening the door to meatier measures, they bemoaned the slow pace of decision-making created by its need for consensus among governments,” Lloyd’s List reports.

“This MEPC exposed the fundamental divide between IMO member states on GHG measures,” said Simon Bergulf, regulatory affairs director at Maersk, one of the world’s biggest shipping companies. “It was not an easy task for the chairman to maintain the discussions on the right track but thankfully some important progress was made.”