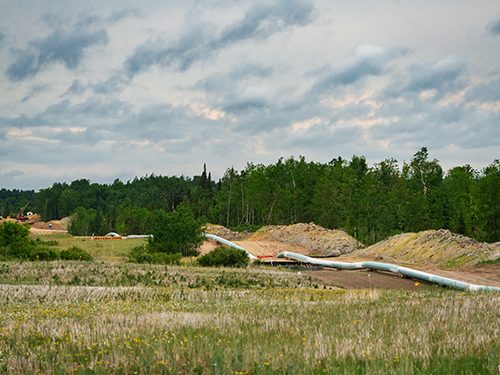 Two contract workers involved with Enbridge’s US$2.9-billion Line 3 replacement project in northwestern Minnesota have been charged with human trafficking, and reports of sexual violence and harassment associated with the project have been flooding in to local crisis centres.

The news comes as no surprise to local Indigenous and anti-violence advocates, reports The Guardian.

“In 2018, the state’s Public Utilities Commission (PUC) held hearings to decide whether to approve Line 3 permits,” the paper writes. “Sheila Lamb, an Ojibwe-Cherokee city councillor for Cloquet and member of the state’s Missing and Murdered Indigenous Women Task Force, testified that extractive industries were linked to human trafficking and disproportionate violence against Indigenous women.”

Pointing to past outcomes, Lamb asked the PUC to recognize that approving the pipeline would put local girls and women in harm’s way.

“There is no way that Enbridge or the unions can monitor these workers 24/7 and hold their hands,” she said. Before approving the pipeline, the PUC noted in its own environmental impact report that “the addition of a temporary, cash-rich work force increases the likelihood that sex trafficking or sexual abuse will occur.”

Still, The Guardian notes, the PUC went on to grant Enbridge’s licence to operate—conditional on the company creating “a public safety escrow fund so crisis centres could apply for funding to respond to anticipated violence.” Lauren Rimestad, communications director at the Minnesota Coalition Against Sexual Assault, said the arrangement made it feel like Enbridge was “pre-paying for trafficking our citizens”. But at least four Minnesota organizations received money to help “prepare for violence and trafficking related to Line 3”.

In Thief River Falls, one of many small communities currently playing host to pipeline workers, the Violence Intervention Project (VIP) applied for funds to help reimburse travel and hotel costs for women who had been assaulted—an effort complicated by the fact that hotels in the region are often booked full with pipeline workers. VIP Executive Director Amy Johnson told The Guardian she felt uncomfortable requesting reimbursement. However, pointing to the terrible nexus between poverty and sexual violence, she added that not applying “would be like leaving money on the table.”

Enbridge spokesperson Michael Barnes vowed “zero tolerance for illegal behaviour by anyone associated with our company or its projects.” And the two Line 3 contract workers who were charged in the human trafficking case and are now awaiting trial have been fired.

But as the Line 3 project continues, so does the threat—and reality—of violence. “There’s certainly connections between how we treat the land and how we treat the women,” said Nicole Matthews, executive director of the Minnesota Indian Women’s Sexual Assault Coalition.