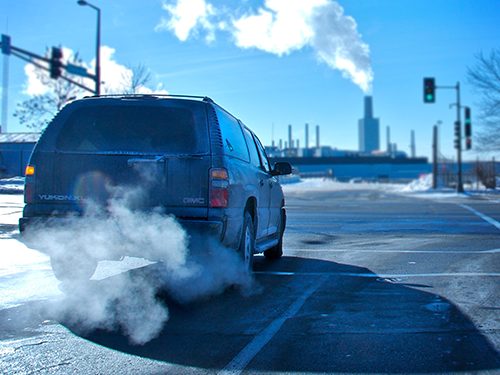 A new report from Environmental Defence Canada finds that pledges from automakers to drive an EV revolution are at odds with their continued hard-sell of fossil-driven SUVs in Canada.

“The car companies are talking a big game, filled with new promises of a cavalcade of electric cars, trucks, and SUVs that’s just around the corner. But Canadians should take these claims with a big grain of salt,” Programs Director Keith Brooks said in a release. He pointed to GM and Ford, with plans to deliver 300,000 EVs by 2026 in North America, while their output of fossil-fuelled SUVs and trucks will hit five million over that period.

And the larger the fossil-burning vehicle, the higher the emissions.

“Transportation is the second-largest source of emissions in Canada, second only to oil and gas extraction. And it’s a sector in which emissions have been steadily rising for decades even while vehicle fuel efficiency has been steadily improving,” said Brooks.

Noting that 80% of passenger vehicles sold today in Canada are SUVs and light trucks (and only 1.6% of them electric), Environmental Defence says that sales activity has added “about 18 million additional tonnes of carbon emissions” to the global atmosphere since 2010.

Meanwhile, automakers’ advertising budgets remain skewed in favour of fossil-fuelled models, the report states. EVs remain very thin on the ground in dealer lots, and automakers still “lobby against climate policy, including any policy that would force them to sell more EVs.”

What’s needed to counteract this “duplicity,” the organization says, is government intervention in the form of “carrot and stick”–style policy to encourage automakers to walk their talk on EVs while making it easier for Canadians to purchase one. Among the report’s recommendations: new taxes on fossil-fuelled vehicles to fund EV purchasing incentives, and “a strict zero-emission vehicle standard to require car companies to sell an increasing percentage of electric cars,” reaching 100% EV sales by 2035 “at the latest.”