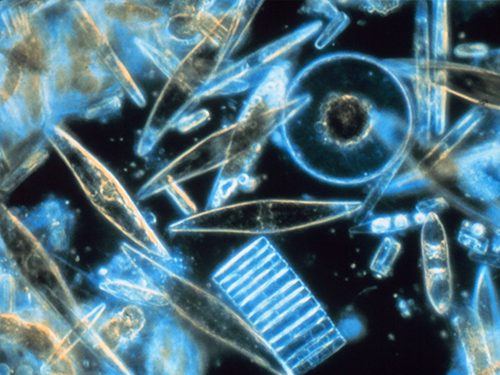 Researchers from Quebec and China have highlighted the unexpected benefits of aluminum when it comes to trapping carbon dioxide (CO2) at the bottom of the ocean.

Researchers are looking at phytoplankton, which lives in the ocean, as a potential ally to fighting climate change underwater, The Canadian Press reports.

Similar to trees on the Earth’s surface, these algae capture CO2, one of the greenhouse gases responsible for global warming, and release oxygen.

The study, published last month, is the result of a collaboration between researchers at the Institut national de la recherche scientifique (INRS) in Quebec and Chinese colleagues, who approached them after obtaining promising results.

Linbin Zhou, the first author of the study, pursued his work in Quebec with other researchers from China, as well as professor-researchers Claude Fortin and Peter Campbell. CP cites Campbell as a leading expert in geochemistry and aquatic ecotoxicology who specializes in the biochemistry of metals.

“I was a bit skeptical at first,” Fortin he told the news agency. “But I found it intriguing.”

Fortin explained that aluminum had always been considered a non-essential element of life, one that was potentially harmful, so the idea that it could play a positive role in the environment did not initially make sense.

But the researchers designed several experiments at the INRS’ Centre Eau Terre et Environnement to test their hypotheses, subjecting algae to different concentrations of aluminum dissolved in water.

Their results suggest that aluminum plays two roles: it promotes the growth of phytoplankton that assimilate CO2, and it also “significantly” delays the degradation of algae—sometimes by more than 50%—thus slowing the release of carbon dioxide.

“Aluminium could then contribute to improving CO2 sequestration,” Fortin said, adding the element is found naturally in marine waters and is not the result of waste dumped in the ocean, such as soft drink cans.

Aluminum is among the most abundant elements in the Earth’s crust.

“This discovery does not offer any concrete action or industrial solution,” he stressed, but it does provide an understanding of aluminum’s role in carbon dioxide sequestration, furthering scientists’ understanding of a natural phenomenon that could benefit the planet.

According to the researchers, the results could also have an impact on climate models by integrating the “positive” effects of aluminum in the deep ocean.

The study, the result of work carried out by professors Tan Yehui and Linbin Zhou of the South China Sea Institute of Oceanology (SCSIO) with the Chinese Academy of Science, along with Campbell and Fortin, was published in May in the journal Limnology and Oceanography.

This report by The Canadian Press was first published in French on June 8, 2021.