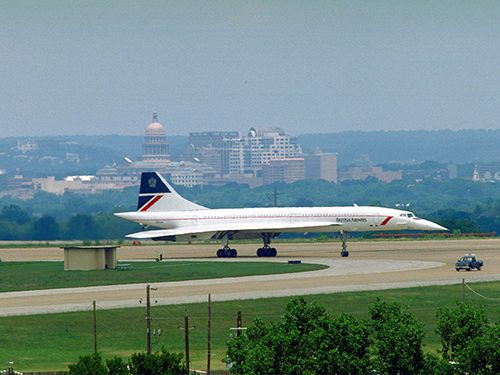 With United Airlines touting its decision to buy 15 new supersonic aircraft as a win for sustainable flight, the company’s critics are pushing back on “the most obnoxious dunk on the global climate” and “the best example yet of what an empty pledge ‘net-zero’ is turning out to be”.

United announced June 3 that it will purchase 15 Overture aircraft from Denver-based Boom Supersonic, with an option to add 35 more. “Once operational, Overture is expected to be the first large commercial aircraft to be net-zero carbon from day one, optimized to run on 100% sustainable aviation fuel,” United enthused.

The company is offering flights from Newark to London, UK in 3½ hours, from Newark to Frankfurt in four, or from San Francisco to Tokyo in six. The new planes “are expected to carry 65 to 88 passengers, fly at 1,300 miles per hour, and transport some of the world’s richest from New York to London for a quick lunch meeting,” Grist reports. “And, barring an incredible technological breakthrough, they will also be terrible for the planet.”

The supersonics would burn five to seven times as much fuel as a conventional jet that doesn’t travel at Mach 1.7, according to the International Council on Clean Transportation (ICCT).

“On top of that,” writes Grist reporter Shannon Osaka, “Boom’s Overtures are slated to soar at 60,000 feet, almost twice as high as the standard cruising altitude of a subsonic plane, which means that its pollutants—including nitrogen oxides that deplete the ozone layer—will stay in the atmosphere longer. All that to shave a few hours off a long flight.”

“It’s the most obnoxious dunk on the global climate,” Dan Rutherford, ICCT’s director of aviation and marine programs, told Osaka. “If you use today’s fuels it’s massively polluting.”

A Boom spokesperson said the company is investing in fuel efficiency improvements for the new plane. “Boom is highly optimistic about SAF [sustainable aviation fuel] supply in eight years when Overture is slated to carry passengers,” they said.

But that supply has a long way to go. “The plan is to run the supersonics on sustainable aviation fuel, which can be made of cooking oil and solid waste or synthetically cooked up in a lab,” Grist explains. “But at the moment, there simply isn’t enough sustainable aviation fuel to go around, and what little there is is prohibitively expensive, costing around three to four times more than conventional fuels.” Just 0.1% of the world’s jet fuel was considered sustainable in 2019, and Rutherford said the 15 supersonics would consume twice as much of it as the entire European Union currently has on offer.

“This is unicorn juice,” said Richard Aboulafia, vice president of analysis at Teal Group, a consultancy based in Fairfax, VA.

But those concerns didn’t get in the way of an enthusiastic reception from the usually environmentally astute Treehugger. “On the one hand, we complain incessantly about the carbon footprint of flying, about how a few rich people are filling the skies with carbon, and how we should all just stop doing it,” writes Toronto-based design editor Lloyd Alter. “But with Boom, it is a whole new world of green sustainable flight.”

Alter acknowledges the concerns with supersonics’ emissions and the questions about sustainable fuel supply. “Can there possibly be enough lard, beef tallow, and schmaltz to keep a fleet of SSTs up in the air?” he asks. “Or is it just wishful thinking and greenwashing, with them ending up dropping conventional fuel into the plane because there isn’t enough SAF?”

But he ends on a quote from Boom Supersonic founder and CEO Blake Scholl. “”While it is important to preserve [hu]mankind’s ability to flourish on our planet, it is also important to extend that ability,” he wrote in a 2018 blog post. “A key part of this flourishing, in our view, is supersonic travel.” Ultimately, he added, “the pursuit of ever-faster travel speed is really a moral imperative.”

“We cannot forget the most important sustainable benefit of supersonic flight, human flourishing,” Alter adds. At the same time, “we can think of some other moral imperatives that should have higher priority.”

350.org co-founder Bill McKibben lays out some of those imperatives in his excellent, weekly newsletter for The New Yorker.

“Surely, we don’t want this. In part, of course, because it’s climate-insane,” McKibben writes. With its promise that the planes will be “net zero from day one”, he says, United has become “perhaps the best example yet of what an empty pledge ‘net zero’ is turning out to be”.

But McKibben is also calling for a cultural shift.
“Let’s talk about something more than emissions,” he writes. “If we’re going to take climate change seriously, it also needs to come with a new aesthetic. We have to start seeing wind turbines on the horizon as kinetic art, not blight, for instance. And we might want to rethink what travel means, something that our pandemic year should have helped us with. At this point, it’s clear that you can conduct a lot of business remotely. What that means is not that we need to stay at home forever but that we could learn to travel slowly, precisely because we can…”

McKibben points to the prospect of regularly-scheduled blimp service as an air travel option worth getting excited about. And he’s in good company. (Dr. Cameron, this one’s for you.)