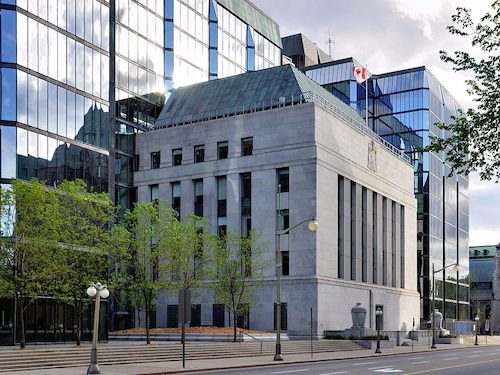 Canadian investors may be in for a rude awakening as they discover that their stocks and bonds in carbon-intensive industries are “mispriced” once the risks of climate change are taken into account, the Bank of Canada warned in its annual Financial System Review released last month.

“The potential impact of climate risks is generally underappreciated, and they are not well priced,” Bank of Canada Governor Tiff Macklem said at the time. “That means the transition to a low-carbon economy could leave some investors and financial institutions exposed to large losses in the future.”

The investments on the bank’s radar “are susceptible to the physical effects of climate change, such as more intense storms and floods, as well disruption from the transition to cleaner forms of energy,” the Globe and Mail explains. The “mispricing” of high-carbon assets could also “delay the massive investments in clean technologies needed for Canada to achieve its carbon emissions reduction targets.”

Underestimating climate risk “is a very legitimate concern regarding asset prices, and one that we frequently hear expressed by financial institutions in our conversations with them,” agreed Sean Cleary, executive director of Queen’s University’s Institute for Sustainable Finance.

The bank’s system review did not refer to the mounting risk of stranded assets—the investments that fossil fuel companies are already writing off because they can’t operate them at a profit—despite an analysis last year that placed the global risk as high as US$20 trillion. But the bank did express concern “about the twin risks of high household debt and climate change,” the Globe writes. “Natural disasters are becoming more frequent and can cause severe financial hardship to households, it said. For example, the Fort McMurray, AB, wildfires in 2016 caused a big increase in homeowners falling behind on mortgage payments.”

With provinces taking their own approaches to matching up those risks, the “different combinations of disaster exposure and financial vulnerabilities could have implications for how natural disasters affect the economy and the financial system as well as for the appropriate policy responses,” the bank said.

Climate risk issues will be at the forefront when Canada’s new superintendent of financial institutions starts work later this year, the Globe predicted a couple of weeks later. “A burning question is how much pressure the new boss will apply on lenders to up their games when it comes to documenting and reducing CO2 emissions,” writes financial reporter Jeffrey Jones. “That includes accounting for their own, but more importantly the labyrinthine task of tallying clients’ greenhouse gases—what are known as financed emissions.”

Jones says Canada’s Office of the Superintendent of Financial Institutions (OSFI) is already “playing catch-up” compared to European counterparts that have already been pressing banks and insurers to account for emissions—and the new U.S. administration is getting into the act, as well. But “the timing of the appointment is auspicious. The superintendent’s tenure is seven years, so the new boss will be at the helm as the really hard work gets under way to achieve a newly-toughened national goal of reducing CO2 emissions 45% from 2005 levels by 2030.”

In a moment when “there is little chance of meeting the goal for cutting emissions without the financial industry doing more heavy lifting,” Jones adds, “OSFI will play a key role.”