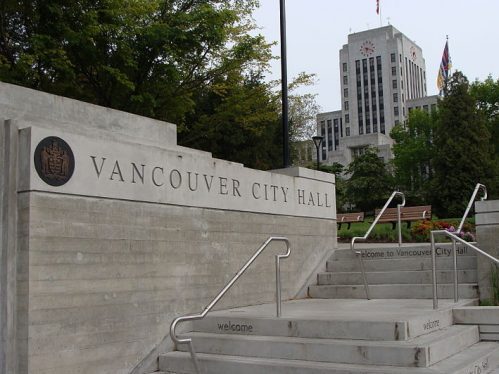 An effort backed by a powerful natural gas organization to erode Vancouver’s climate emergency plan has failed, but the thin margin on the final council vote has campaigners and green builders on alert for a protracted battle.

Thanks to an engaged and mobilized public, “Amendment D,” a measure that would have delayed a planned ban on fracked gas in all new construction, was defeated at last week’s meeting at City Hall, writes Dogwood.

“On June 1, Vancouver’s staff-led Bylaw Modernization Task Force submitted their inaugural report. Their recommendations to council came in an omnibus package of proposed bylaw changes, all seemingly designed to speed up the permitting and development process at the City of Vancouver,” Dogwood writes.

But included in that four-part package was a motion to delay the city’s Climate Emergency Plan (CEP)—a recommendation backed by the Canadian Institute of Plumbing and Heating (CIPH).

“In essence: the most powerful civil servants in the City, backed by a high-profile national gas industry front group, were proposing to roll back one of North American’s most ambitious and sophisticated municipal climate change management plans.”

The Canadian Association of Physicians for the Environment (CAPE), which promotes civic involvement through its Switch It Up campaign, told Dogwood that if the motion had passed, the city’s emissions reductions would have been pushed back even further than the proposed date of January 1, 2023. That’s because the rollout would have occurred in “the thick of a civic election—when climate action is particularly difficult.”

Allowing the industry-proposed amendment to go forward would have “set a dangerous precedent,” CAPE added. “Elected officials across British Columbia watch the City of Vancouver’s climate policy closely,” and “opponents of climate action could point to the one-year delay in efforts to hamstring climate action in their own communities.”

CIPH argued that pandemic pressures had left its members needing more time—and that, in any case, the city “should maintain its gas piping infrastructure for the eventual rollout of alternative fuel sources like hydrogen or renewable natural gas,” The Tyee reports.

Councillor Christine Boyle, who spoke out against the delay, rebuffed the idea that anyone in involved in housing development could declare themselves unready for a zero-emissions world. “There are a number of companies who, because we laid out this timeline, have already been making investments to be in line with it,” she said. “If we delay the plan, we’re punishing those that took us at our word.”

A vote for the delay would also have dealt a punishing blow to hopes for better public health. In an email to The Tyee before the vote, CAPE Executive Director Anjali Helferty wrote that the roughly one million B.C. households that heat and cook with natural gas “collectively produce the same amount of pollution as 800,000 vehicles,” and that households with gas stoves suffer a greater incidence of childhood asthma.

Declaring her organization “alarmed” by the gas lobby’s efforts to throw a wrench into the workings of one of Canada’s strongest climate policies, Helferty said it is clear fossil interests “are attempting to stall this transition for as long as possible.”