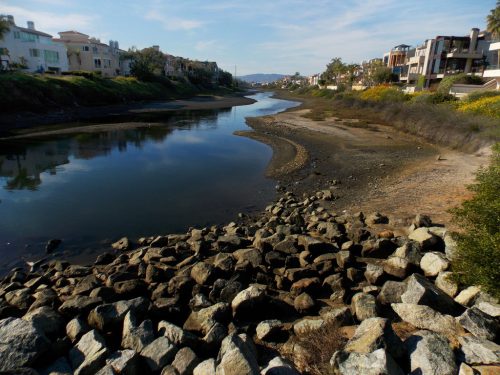 California may be able to address its side-by-side problems with flooding and drought by diverting water from areas with two much moisture to other parts of the state that need it, according to a new study in the journal Science Advances.

The analysis by former Stanford University hydrologist and postdoctoral scholar Xiaogang He and colleagues “focused on the highest levels of streamflow likely to accompany future spikes in big storms,” Inside Climate News reports. “Harvesting those high-water flows, they concluded, could help mitigate flood risk while boosting the state’s dwindling groundwater supplies.”

That line of thinking resulted in “the first statewide analysis of the floodwater potentially available to restore depleted groundwater basins under future climate change scenarios,” Inside Climate adds. The numbers were pretty dramatic: the equivalent of 192,000 to 232,000 Olympic swimming pools per year under intermediate and high emission scenarios, rising to 552,000 pools per year by 2100 if emissions aren’t brought under control.

The replenishment is already badly in the St. Joaquin Valley, which ICN describes as the backbone of California’s US$50-billion agriculture industry. “Farmers there have sucked so much water from the Tulare Basin to grow crops in an arid landscape that parts of the San Joaquin Valley, including one entire town, have sunk several feet,” the news story states. “The state’s groundwater sustainability law gives water managers roughly 20 years to replenish, or recharge, aquifers by balancing pumping and resupply levels.”

But with hundreds of thousands of acres and billions of dollars’ worth of production in play, that may be easier said than done. “A lot of farmers may not be willing to retire their crops, especially if they’re perennial high-profit crops like grapes or almonds,” He said.

Inside Climate News has more on the modelling He and his team carried out to stimulate stream flows and climatic conditions based on different levels of emissions, while factoring in human actions like irrigation and reservoir use.