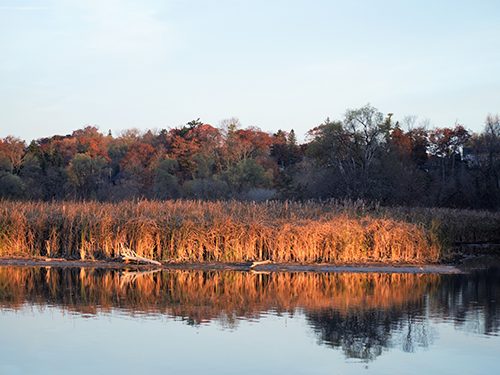 As global heating undercuts the ability of aquatic habitats to store and circulate oxygen, the myriad creatures that inhabit the world’s beleaguered freshwater lakes are finding it harder and harder to breathe, says a new study in the journal Nature.

“Falling levels of oxygen in oceans had already been identified, but new research shows that the decline in lakes has been between three and nine times faster in the past 40 years,” reports The Guardian. Oxygen concentration has fallen particularly sharply at depth (19%), but deoxygenation is also notable in surface waters (5%).

As global temperatures rise, oxygen escapes from warmer water more easily, The Guardian explains. And what oxygen remains is less likely to be circulated at depth because the surface waters no longer get cold enough in the late fall to trigger the annual “turning” of the water column.

Combining over 45,000 dissolved oxygen and temperature profiles from nearly 400 lakes in temperate zones in the United States and Europe, the researchers were able to map such trends in oxygen concentration, with the earliest data coming from 1941 and the latest from 2017.

What the researchers discovered is that oxygen levels have actually increased at the surface of about 20% of the lakes studied—but this is by no means a good thing. “This is most likely due to higher temperatures driving algal blooms, which can also produce dangerous toxins,” The Guardian explains.

A further danger from declining oxygen levels in lakes: “Where oxygen levels have fallen to almost zero, phosphorus can be drawn out of sediments, providing an essential nutrient for bacteria.” These bacteria produce a lot of methane, which has more than 80 times the warming power of CO2 over its first 20 years in the atmosphere, leading to yet further climate heating.

Winding Down Fossils is Essential, Doable to Keep Average Warming to 1.5°C