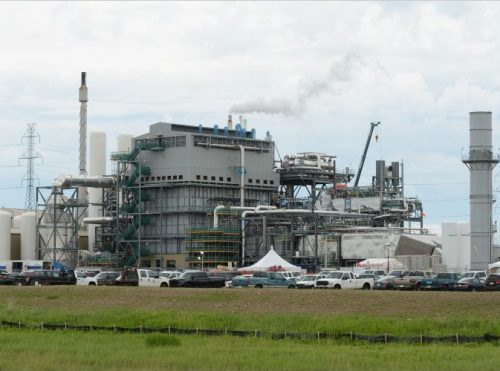 A plan by a Pennsylvania-based industrial gas and chemical company to build a C$1.3-billion “blue” hydrogen plant in Edmonton is raising cautious optimism about a new way to drive the transition from a fossil- to renewable-based fuel, while raising concerns about the methane emissions the project could trigger and its potential to lock in future demand for climate-busting natural gas.

Air Products Canada Ltd., which already has hydrogen operations in Alberta and in Sarnia, Ontario, plans to run the new plant on natural gas, but says it can capture 95% of the resulting carbon pollution using a new auto-thermal reforming (ATR) technology. By comparison, production of fossil-derived “grey” hydrogen captures no carbon at all, and Air Products says conventional “blue” hydrogen—which amounts to the “grey” variety with carbon capture—can divert about half.

The company says the new plant, which is scheduled to begin operations in 2024, will produce enough hydrogen to supply every transit agency in Alberta.

The Canadian firm’s parent company, Air Products & Chemicals, is also working on the world’s biggest “green” hydrogen effort to date, the Neom project in Saudi Arabia, which will be powered by four gigawatts of wind- and solar-generated electricity, Greentech Media reported last year.

On Wednesday, the federal government and Invest Alberta announced they had each signed on to support the Edmonton project. Alberta is backing it with $15 million in carbon levy revenue. There was no word on the size or timing of any federal subsidy.

“We will be working out details of potential support and incentives for this project,” Alberta Premier Jason Kenney told media.

“Once you have [a memorandum of understanding], then you need to move to the next phase to come to a final agreement and define the level of contribution and the commitments that would be made by the federal government and the company,” added federal Industry Minister François-Philippe Champagne.

“By being a first mover and investing in this innovative landmark project, we are paving the way for hydrogen from Edmonton to meet industrial and transportation needs throughout western Canada,” Air Products Canada Chair, President, and CEO Seifi Ghasemi said in a government release. “Our highly integrated project will be a model for net-zero atmospheric gas, hydrogen, and power production.”

Edmonton Mayor Don Iveson called the project a “key milestone” for his city’s low-carbon future, producing 2,500 construction jobs and significant tax revenue. “It will harness the energy expertise of the Edmonton metro region to produce liquid hydrogen that could be used to fuel city buses and other transportation applications across western Canada, and ultimately serve lucrative export markets as well.”

The Pembina Institute reported Wednesday that it had conducted an independent assessment of the project, under a contract with Air Products Canada. Its announcement headlines the project as “a big improvement” on standard practice.

“The project will produce hydrogen using next-generation auto-thermal reforming technology and best-in-class technology to minimize emissions from plant operations, including carbon capture with a 95% capture rate and onsite generation of electricity using a hydrogen-fueled power plant,” said Deputy Director Simon Dyer. “This is a major improvement over traditional hydrogen production facilities in Canada today and sets a high standard for new hydrogen production from natural gas.”

Despite high upstream emissions from the gas that will fuel the plant, Pembina’s analysis showed that the facility’s fully-calculated, life cycle emissions will be “substantially lower than average hydrogen production from natural gas with carbon capture,” Dyer added. “We are impressed by the innovative approach taken by Air Products and encourage them to consider ways to reduce the upstream emissions from their natural gas supply.”

In a short statement Wednesday, Environmental Defence Canada wrote the project off as a bid to “help oil and gas companies greenwash themselves,” with Canadian governments “showing how beholden they are to fossil fuels.” With the transition off oil and gas already happening, said Julia Levin, EDC’s climate and energy program manager, “this investment won’t help us make the deep emissions cuts we need to tackle the climate crisis.”

In an interview Thursday, Dyer explained that the Air Products approach uses more natural gas, but still ends up with lower overall emissions compared to other “blue” hydrogen processes. He calculated the project’s emissions at 27.4 kilograms or carbon dioxide or equivalent per gigajoule of hydrogen, compared to 32.4 or 51.5 kilos for standard “blue” hydrogen processes and 59.9 kilos for a plant that simply burns natural gas.

That makes the Air Products technology a 15 to 47% improvement on standard “blue” hydrogen production, he said. “Obviously, we can’t afford dead-end pathways at this point, but this is building out a hydrogen infrastructure that has potential to favour zero-carbon and green hydrogen over time. And for the deep emission reductions we need in the short term, when it’s displacing existing ‘grey’ hydrogen, this goes a bit beyond the incremental.”

He added that a “green” hydrogen plant in Alberta would still produce 7.8 kilograms of CO2 per gigajoule, since it would run on fossil-generated electricity.

But Levin said those calculations don’t much matter. “This is about path dependency,” she told The Energy Mix. “Are we locking in natural gas expansion for the next 20 years, or are we building the renewable energy sector that we know we need? Best in class of a fossil fuel is still a fossil fuel. You still can’t get rid of the carbon in fossil fuels, even with a higher capture rate. And the methane leakage is a significant climate factor that is consistently under-reported. That alone makes fossil hydrogen incompatible with where we need to be going.”

And indeed, the wild card in the Air Products plan is the methane emissions from the natural gas the company will buy to run its Edmonton plant. Methane is a shorter-lived greenhouse gas than carbon dioxide, but it’s 84 times more potent than carbon dioxide over 20 years—the time span when humanity will be scrambling to get climate change under control.

Dyer said the 80% of Air Products’ emissions coming from the gas the company acquires “are outside the control of the company, but at the same time the lion’s share of the life cycle emissions come from upstream natural gas production and transport. So the company needs to do what it can to ensure those emissions are addressed.”

But field studies dating back at least to 2017 point to methane emissions that were 60% higher than Alberta government estimates, and to high enough leak rates at the province’s abandoned wells to produce local health and even explosion risks. Last month, new measurements showed an Alberta fracking field producing Canada’s biggest methane cloud since satellite tracking began, while the inability to measure and regulate methane emissions emerged as a potential fatal flaw in the country’s embrace of blue hydrogen.

“In general, not just speaking about this project, the potential role for blue hydrogen is fully dependent on the natural gas industry’s ability to monitor and report accurately, address leaks, and demonstrate that the emissions profile of natural gas is indeed as low as it can be,” Dyer told The Mix.

Levin cited a news report earlier this week that had senior officials at Natural Resources Canada brainstorming how to persuade investors to buy in to blue hydrogen rather than green. “How would you address the debate over green versus blue hydrogen to persuade financial institutions to invest in blue hydrogen projects?” one briefing note asked.

That question “was just so indicative of where the government is on this,” Levin said. “It’s not about climate. It’s about helping the oil and gas industry once again.”