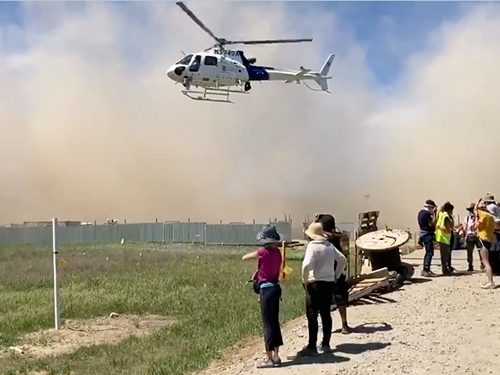 A peaceful protest against the expansion of Enbridge’s Line 3 pipeline in northern Minnesota on Monday was met with the same helicopter-as-weapon tactic that authorities deployed against citizens protesting George Floyd’s murder last summer.

In a widely-shared video first posted to Twitter by Minnesota Public Radio, an AS350 helicopter can be seen using its downwash to “sand-blast” some 500 Indigenous and allied protestors who had turned out to blockade an active pump station along Line 3, writes climate journalist Emily Atkin in her Heated newsletter. While pilot’s intentions remain unclear, Atkin writes, the Department of Homeland Security helicopter hovered largely above a group who had chained themselves to Enbridge’s construction equipment—and thus were unable to flee.

“If the tactic sounds familiar, you may be thinking of the Washington, D.C., protests over racial injustice last summer after George Floyd’s murder by a Minneapolis police officer,” Heated writes. A separate article in The Drive notes that this “established” crowd-suppression method “presents significant dangers to both bystanders on the ground and the helicopter and its crew.”

One recent event where this tactic was not seen, adds Heated, was “the violent insurrection at the U.S. Capitol” that took place this past January 6. “Helicopter blasting, it appears, is reserved only for people opposed to racial injustices in Minnesota.”

The New York Times writes that “police later escalated their attempts to end the protest, using what appeared to be a crowd-dispelling sonic device known as an LRAD, or Long Range Acoustic Device, on the protesters.” Tribal attorney and Couchiching First Nation member Tara Houska told the Times the helicopter incident was followed by police in riot gear, who “broke through the steel fences and…just began arresting everyone.”

By the end of the day, over 100 protestors had been taken into custody. Late yesterday, the Indigenous Environmental Network (IEN) reported about 200 arrested.

“This is an act of violence on tribal land,” said Houska.

At the headwaters of the Mississippi River near Bemidji, Minnesota, more than 1,000 activists—including 350.org co-founder Bill McKibben and actor/activist Jane Fonda—marched to protest the lack of a proper environmental review before the Trump administration granted Enbridge a federal permit to bore under the river. “Biden has the authority to suspend or revoke the permit—and should, considering his pledges to aggressively tackle climate change and secure tribal sovereignty,” Atkin writes.

And Biden’s apparent disinclination to engage could have devastating consequences for the global climate. Citing the project’s final Environmental Impact Statement, the Times says Line 3 will “carry enough oil that, when burned, would add nearly 200 million tonnes of greenhouse gases to the atmosphere each year during the pipeline’s lifetime.”

Even before the oil is burned, the project is already doing plenty of harm on its own. Winona LaDuke, executive director of Indigenous environmental advocacy group Honor the Earth, told the Times the battle to protect the region’s watersheds against Enbridge has been like “an invasion”—one her group has been fighting for seven years.

IEN celebrated the march and the action at pump station as Minnesota’s “largest ever anti-pipeline mobilization.” A fitting record, given the size of the project: the Line 3 expansion involves drilling under no less than 22 of the state’s rivers, and crossing 200 other bodies of water.