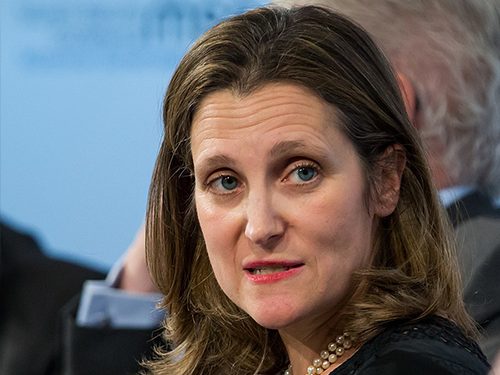 Finance ministers and central bank governors from the world’s seven wealthiest nations have signed off on a communiqué that recommits to US$100 billion per in international climate finance, but still leaves it up to G7 leaders meeting in Cornwall, UK next week to decide how the now dozen-year-old promise will be kept.

“International climate finance is critical for supporting developing countries’ climate change adaptation and mitigation efforts,” the communiqué states. The countries pledge to mobilize the $100 billion per year from public and private sources, “increase and improve our climate finance contributions through to 2025,” and increase financing for climate change adaptation nature-based climate solutions.

Canada’s fair share of the climate finance commitment would be US$4 billion per year.

Climate observers declared the communiqué “unambitious” in a release that circulated after the finance ministers’ meeting concluded. They pointed to a lack of clarity on how individual countries would respond to the $100-billion promise, only limited progress on mandatory climate risk reporting by major companies, and the lack of any reference to eliminating fossil fuel subsidies—a task that falls squarely on finance ministers’ to-do list.

The communiqué expresses general support for “properly embed[ding] climate change and biodiversity loss considerations into economic and financial decision-making,” greening the global financial system, reporting on companies’ climate and environmental impacts, and recognizing the risks the climate crisis poses for the stability of the global financial system. But the emphasis is on discussion, information sharing, and supporting continuing efforts, with few if any hard deadlines in the mix.

Ahead of the finance ministers’ summit, major investor organizations produced a small wave of statements on how the G7 should respond to climate risk. The Investment Association, a London-based group of asset managers with a combined £8.5 trillion under management, urged the seven countries to follow the UK’s example and force companies “to come clean about their exposure to climate risks,” The Guardian reports.

The organization “also called on the world’s largest developed economies to issue sector-by-sector guidance to help firms plan to meet Paris Agreement climate goals,” and to coordinate and standardize a common approach to climate reporting.

“The meeting of the G7 is a prime opportunity for the world’s largest economies to take a coordinated, global approach to tackling climate change,” said CEO Chris Cummings. “Ensuring high-quality and comparable data on the risks that companies face from climate change is key to achieving this and meeting the net-zero targets.”

In the U.S., meanwhile, credit rating agency Fitch Ratings warned that banks “will face new capital requirements that will reflect how exposed their loan books are to climate change,” Bloomberg writes.

“Such a requirement would mark a significant expansion of new rules that the financial industry, particularly in Europe, is now facing amid a race against time to prevent an environmental catastrophe,” the news agency adds. “The goal is to force banks to channel money away from those corners of the economy that pollute and toward businesses that have committed to lower carbon emissions.”

“That is the logical next step,” said Janine Dow, a Fitch senior director for sustainable finance. “Because once you size a problem, then you identify the risk. And as a regulator, you can’t just leave an emerging risk exposed.”

“Regulators haven’t been more explicit yet because they don’t have the data to justify a clear approach,” added Monsur Hussain, a senior director for financial institutions at Fitch. But “if you read between the lines” of the European Central Bank’s most recent guidelines on financial institutions’ climate-related and environmental risks, issued in November, “that is the direction of travel”.

Hussain said it might take the ECB another three years to come up with a set of mandatory minimum requirements.

The G7 finance ministers did agree on a 15% minimum global tax rate for corporations, aimed at discouraging multinational companies from shifting their operations to countries with lower taxes. The Washington Post calls that decision “a first step to reverse a four-decade decline in the taxes paid by multinational corporations” and “a major breakthrough for the Biden administration’s efforts to enact a floor on the taxes paid by corporations worldwide.”

“The G-7 finance ministers have made a significant, unprecedented commitment today that provides tremendous momentum toward achieving a robust global minimum tax at a rate of at least 15%,” U.S. Treasury Secretary Janice Yellen said in a statement. “That global minimum tax would end the race to the bottom in corporate taxation, and ensure fairness for the middle class and working people in the U.S. and around the world.”

Yellen also cast the agreement as “the revival of multilateral cooperation” after the deep stresses and strains of the Trump years, the Post says.

Canadian Finance Minister Chrystia Freeland said the finance ministers’ agreement was just a first step toward a global deal. “Multinational companies need to pay their fair share of taxes,” she told media Saturday, and “jurisdiction shopping allows them to avoid doing that.”

The Post’s coverage has more on the politics of the decision in the U.S. and the European Union.