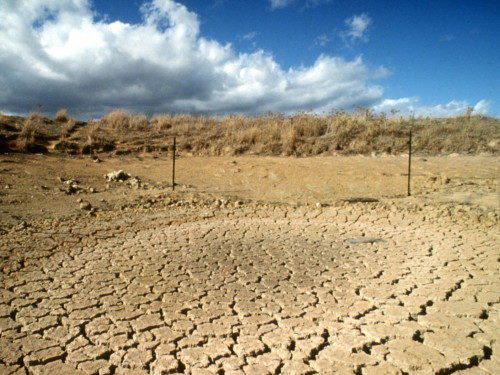 From post-wildfire sere forests, to a sharply depleted Lake Mead, to a devastated spring salmon run, to threats of violence along the Oregon-California border, a dry spring is creating conditions for a challenging summer throughout the western United States.

In one of many drought-related stories hitting the wires this spring, experts fear that aquifers depleted by warming temperatures, intensive irrigation, and a drought-exacerbating dry soil feedback loop are putting America’s heartland on the road to another Dust Bowl, writes YaleE360.

Such searing heat means yet drier soil, which means, in turn, more periods of drought. “When the soil contains a lot of moisture, incoming energy from the sun gets absorbed by the water as it turns from a liquid into a gas,” explains E360. When the soil is already dry, there is nowhere for that energy to go, except into the parched earth and outward into the ambient air. The result: more heat waves, which in turn lead to drier conditions, which in turn produce more heat waves.

Then there is the problem of aquifer depletion, driven by the combination of drought and intensive irrigation. E360 writes that the Ogallala aquifer system, which supplies between 30 and 46% of irrigation water in some parts of the Great Plains, could be depleted by as much as 70% by 2080.

All of this bodes ill for the Midwest and Great Plains, the country’s top producers of corn, soybeans, wheat, and livestock.

“That level of agricultural intensity, paired with increasingly hotter weather, raises the stakes for the United States should another historic drought occur,” E360 writes. A 2016 computer simulation of how Dust Bowl conditions would affect modern agriculture—where virtually all topsoil would be dried out and whipped away by searing winds—found that “corn and soy crop yields would decline by around 40%” while wheat yields would fall 30%. For every degree Celsius increase in temperature, the study found, effects would worsen by 25%.

While intensive irrigation enabled the United States to weather the La Niña-exacerbated drought of 2012, E360 adds, that was a case of robbing Peter to pay Paul: to survive the drought, Western agricultural regions severely taxed their groundwater supplies.

Describing the state of the Ogallala aquifer as “one of persistent decline,” U.S. Geological Survey hydrologist Virginia McGuire said water levels in some places are less than 50% of what they were a century ago. “If that trend doesn’t change, at some point there’s going to have to be a reckoning,” she said.

The United States is not the only country growing frighteningly parched. Citing data from NASA’s GRACE-FO satellite gathered a year ago, E360 reports “dangerously dry soils in Germany, Poland, the Czech Republic, Ukraine, and parts of Russia.”

Back in the United States, another scary drought story is emerging out of California, with Inside Climate News reporting that “the driest year in four decades” has left federal officials formerly announcing, for the first time ever, that “they don’t have enough water to supply many of their agricultural customers.” Meanwhile, city dwellers in Santa Clara County have seen their water deliveries cut by 50%.

Sketching out how water delivery works in California (it’s very complicated), Inside Climate says the state “ships water to cities and farms through a combination of state and federal programs that oversee a complex network of hundreds of miles of dams, reservoirs, and aqueducts.” Many farmers rely on water from the Central Valley Project (CVP) of the U.S. Bureau of Reclamation, which manages nine million acre-feet of water (“roughly nine million football fields covered with a foot of water,” explains Inside Climate).

But as the Bureau wrestles with historically low water levels, “not all water users are treated equally,” said Iris Stewart-Frey, associate professor of environmental studies and sciences at Santa Clara University.

Stewart-Frey’s recent research found that “richer San Francisco Bay users saw no water restrictions during the 2012-2016 drought, while poorer users in the Central Valley and South Bay saw 30% cuts, and environmental flows were reduced by up to 90%.” Affirming a sorry pattern, Stewart-Frey noted that “those with the least rights to water and are less wealthy get cut off first.”

Ellen Hanak, vice president and director of the Public Policy Institute of California’s Water Policy Center, told Inside Climate that conditions are worse than anticipated because the spring was so abnormally dry.

“Usually, you get a bit of help with some late spring storms, and we didn’t,” she said. “Plus, it’s been dry and warm, so the snowpack just kind of disappeared.”

The late winter snowpack of the Sierra Nevada isn’t the only thing in the region that has vanished into thin air. AZ Central writes that the water levels in the Lake Mead reservoir, contained by the famous Hoover Dam, have dropped nearly 43 metres since 2000. The reservoir now stands at 37% capacity and is fast approaching the lowest levels in its 86-year history.

“One of the driest 22-year periods in centuries is colliding with the [Colorado] river’s chronic overuse,” AZ Central explains. “As the reservoir falls toward record lows, its decline threatens the water supplies of cities and farmlands, and reveals how the system of managing water in the desert Southwest faces growing risks.”

Bureau of Reclamation River Operations Manager Mike Bernardo told AZ Central the low levels can be traced to historic parched conditions that reach all the way up the water system to the Rocky Mountain watersheds that feed the Colorado River.

“The past 12 months have been among the driest on record across the Colorado River Basin,” AZ Central reports. “Inflows into Lake Powell from April through July are estimated to be just 26% of the long-term average.”

And while supply plummets, demand is soaring. The Southwest’s farmland regions are now entering their peak irrigation season—and that is not the only demand on Lake Mead’s resources. The Hoover Dam is also a hydroelectric station, once generating enough power to annually supply approximately 450,000 households. Today, it powers roughly 350,000.

“With every foot the lake declines, about 6 MW of power generating capacity is lost,” notes AZ Central. Should water levels fall below 290 metres, the Hoover Dam stops generating power completely.

Citing the federal government’s latest five-year projections, AZ Central adds that Lake Mead stands a 25% chance of hitting close to that level by 2025.

California will also be in the crosshairs of potentially ferocious wildfires. Climate Nexus describes the possible impact of the extended drought on the state’s fire season as the equivalent of dousing it in gasoline.

“At the opening of the 2020 wildfire season, 3% of California was in extreme or exceptional drought and more than 4% burned,” the publication states. “This year, more than 73% of the state faces similar drought conditions. In other parts of the Southwest, juniper trees are dying off at increased rates because of the intensification of a climate change-fuelled megadrought and turning forests, with trees covered in dead needles, into 30-foot-tall tinder boxes.”

Climate Nexus cites an Associated Press article in which Brian Steinhardt, an Arizona-based forest fire zone manager, explains that forest soils from Oregon to New Mexico are drier than they’ve been since 1895.

“All this adds up, Steinhardt, a veteran of 32 fire seasons, told the AP, to ‘probably one of the driest and potentially most challenging situations I’ve been in’.”

And in the marshlands along the California-Oregon border, the year’s historic drought has heightened a century of mounting tension around the Klamath Project, a water management scheme that has historically allocated scarce resources for irrigation, often at the expense of local fish stocks that are now nearing extinction.

“Hoping to limit the carnage, federal officials have shut the gates that feed the project’s sprawling irrigation system, telling farmers the water that has flowed every year since 1907 will not be available,” the New York Times reports. “Some farmers, furious about water rights and fearing financial ruin, are already organizing a resistance,” with one protest sign near a nearly dry irrigation canal urging supporters to “Tell Pharaoh let our water feed the Earth”.

In the thick of the brewing conflict is Ammon Bundy, an anti-government militant who led an armed occupation of an Oregon wildlife refuge in 2016. Now, he’s spoiling for a fight over water.

“Who cares if there is violence? At least something will be worked out,” Bundy said, in an interview in which the Times says he ridiculed people who wouldn’t fight for the country’s food supply. “‘Oh, we don’t want violence, we’ll just starve to death.’ Heaven forbid we talk about violence.”

That kind of talk is making local leaders distinctly nervous. “There are folks on both sides that would really like to throw down and take things in an ugly direction,” Clayton Dumont, a member of the Klamath Tribal Council, told the Times. “I hope it doesn’t happen, but it’s a possibility.”

High Country News says the population of juvenile salmon on the Klamath River, which flows from Oregon into northern California, has also been decimated by a disease that thrives in warmer water. The loss of the spring run will prove devastating to Indigenous communities in the region which depend on the fish for food and income.