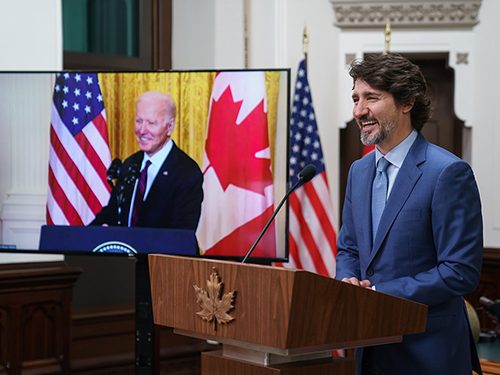 Canada and four other big fossil exporters are under the microscope after announcing formation of the Net Zero Producers’ Forum (NZPF), a bid to either “develop pragmatic net-zero emission strategies” for fossil-dependent economies or slow down the push for faster, deeper carbon cuts—depending on how you read the fine print.

When the United States, Canada, Qatar, Norway, and Saudi Arabia tipped the new forum during the White House Leaders’ Summit on Climate April 22, the news was buried in a flurry of other announcements, Oil Change International and seven other organizations noted in a briefing last week. Now, it’s getting a closer look.

The NZPF is “arguably the first international initiative bringing together fossil fuel producers to discuss the impact of climate policy on the production of oil and gas directly,” the groups say. But “while this tacit recognition by major oil and gas producers that their contribution to the climate crisis can no longer be ignored is an interesting development, the framing of the initiative and its main objectives raise the prospect of the NZPF being a greenwashing tool in service to the oil and gas industry’s interests.”

Which means that, “unless the NZPF members align around the need for a managed and equitable phaseout of fossil fuel production in line with the 1.5°C limit, this forum will only serve as a smokescreen to help prolong the life of fossil fuels assets and ultimately make the global climate crisis worse.”

The briefing goes through some of the main sources of analysis on a 1.5°C pathway, including the International Energy Agency’s recent 2050 roadmap and the 2020 Production Gap Report. Against those benchmarks, the groups say, the forum appears to miss the mark.

“Details on the objectives and modus operandi of the NZPF are scarce, but the language used by its founding members was carefully crafted to avoid any mention of aligning oil and gas production plans with rapidly decreasing carbon budgets,” the groups write. Coverage in Climate Home News indicated that “leaving fossil fuels in the ground is not on the agenda,” a decision the groups say is “fundamentally at odds with the growing body of research showing that continued expansion of fossil fuel production is incompatible with mitigating the climate crisis”.

The forum’s upcoming fall meeting will be its first opportunity to address those gaps. The briefing lays out seven steps for Canada and its four newfound fossil allies to pursue:

• Agreeing to an immediate decline in fossil fuel production;

• Recognizing that it’s up to the world’s wealthiest countries to pursue the fastest fossil fuel phaseouts;

• Planning for fossil production to decline at a rate consistent with a 1.5°C future, with an explicit end date;

• Committing to “absolute emissions reductions” that don’t depend on carbon offsets or carbon capture technologies;

• Supporting fossil fuel workers and communities through the job and economic transition ahead;

• Introducing transparent, accountable production plans “so that communities, investors, and countries can hold each other to account” for working toward a 1.5°C target.