The Future is Ours as We ‘Glue Ourselves Anew’, Sunrise Organizer Writes 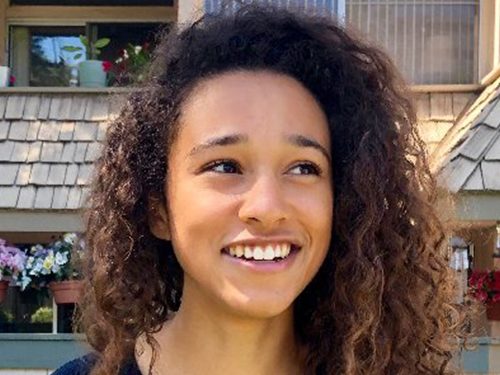 After a year of compounded crisis, cultures and attitudes are shifting and a better future can emerge, writes Sunrise Movement organizer Nikayla Jefferson. “The world is alive,” she says, “coming out of its own dark winter and into a spring that felt distant and unlikely.”

Boxes of books and bags full of clothes blocked the view in my rear-view mirror. My backpack, stuffed with trail mix, my journal, and a map of Death Valley National Park rode shotgun while we cruised west, the two-lane highway stretched into the foothills of snow-capped Sierras.

The two-lane highway through flats scorched and barren. It does not rain often in the high Mojave Desert, but this year it did not rain at all. This year, life felt scarce. Days marked by death tolls, I watched the curve soar higher and higher from an apartment alone, while I spiraled down, and down, into a darkness without end.

COVID-19 brought an unprecedented era of global despair and the U.S. election was a coin toss referendum on fascist white supremacy. The past year pulsed with electric anxiety, and as someone who struggles with her own anxiety, I found myself unable to emotionally unplug from the alternating currents of human events: lockdown without end, the murder of George Floyd, a summer of uprisings, uncertain defeat of the Trump presidency, and the development of a vaccine. All set on the backdrop of the climate emergency existential challenge that threatens the livability of our planet. An existential threat, but not the only one.

A year of heightened political and ongoing climate crises, in a year of personal crisis, too. Trying to make sense of the world, while also trying to make sense of myself: questions of my identity and future while coming into climate movement leadership, leaving home, beginning a PhD program, and confronting trauma in the quiet of COVID lockdown. Confronting the other existential threats that lurk in my life as a 24-year-old, queer, Black American woman: violence, erasure, and white supremacy.

Overwhelmed by political and personal crises, paired COVID and climate crisis, paired with an anxiety disorder—I spiraled and landed face-first at the bottom.

From the bottom, I stared up at the emergency room ceiling. A late-2020 panic attack gone too far, and I waited for the attending doctor to tell me just as much so I could go home. A case of compounded crisis nearly crushed me.

Nearly—but it didn’t. I took my broken bits home in a bag, and tasked myself with the long job of sorting through the pieces and gluing myself anew. The new person, someone who decided to leave graduate school, commit herself fully to the climate movement, pack her life into the hatchback of my station wagon, and set off pointed towards her own North Star.

On my drive north through Death Valley, along the scorched and barren two-lane highway, fields of California poppies rose from the famished Earth. It did not rain this year, but these wildflower seeds sprouted determined because life is remarkable and tenacious.

From the bottom, we all stared up at the ceiling. The past year nearly crushed us. Nearly—but it didn’t. The world is a bag of broken pieces, the image of the next world has yet to be sorted and glued anew. In the United States, I hope this past year is our bottom and we take a moment for national reckoning. We’ve allowed the wildest dreams of the white, the wealthy, and the few to be the lived nightmare for the many. Mega-corporations profited from a global pandemic while essential workers risked their lives for minimum wages with minimal protections. The murder of George Floyd sparked a summer of racial revolution, but he should be alive, as should all the other names we chanted in the streets that died in police violence. Democracy worked to defeat Trump, but it almost didn’t: too many people were denied their right to vote, but half of those that did cast a ballot voted to re-elect a white supremacist, and then a handful of them attacked our capitol to stop the transition of power.

2020 was one of the hottest years on record, and even grounded airplanes and empty freeways had little impact on global carbon emissions. 2020 brought record wildfires to my state of California, and this year’s fire season has started early. We’ve allowed capitalism and white supremacy to steer the direction of our country in a spiral towards the bottom, and for the sake of all our lives and the health of this planet, I hope we choose to leave those pieces behind in our long journey to glue our country anew.

A long journey, but I see the image of our future beginning to sharpen. I see it in the principles for a just transition and policy proposal for a Green New Deal. I see it in the COVID mutual aid networks, visionary murals painted on closed storefronts, and hear it in the chants loud for Black Lives through the summer streets.

I see it in my parents, children of Reagan, beginning to confront neoliberalism and ask why private hospitals and student loans drain their savings accounts as citizens of the wealthiest country in the world. I see it in my grandparents, white Baby Boomers, in their realization that Obama did not usher in a post-racial America and only structural transformation and restorative justice can end racism in America. I see it in my brothers, Gen-Z, who embrace queer identities, champion socialism, and firmly believe their dreams will be our future. Our cultural consciousness is changing.

The image of the United States we thought impenetrable has fractured, and social movements, justice organizers, and stewards of the Earth are trying to piece us back together. Better. Stronger. Seams glued with empathy and economies of care, pieces that are of the dreams of the many, and pointed towards a North Star of collective human flourishing.

On my drive through Death Valley, my glue is still fresh and drying at the seams. I took the bottom as an opportunity to recognize I am still alive, and I can change into a better self. The world is still alive, and the California poppies waving through orange fields across a droughted desert are evidence of this fact. The world is alive, coming out of its own dark winter and into a spring that felt distant and unlikely, evidence that spring will always come, and we will continue to cycle through seasons of crisis and despair. We are still alive, and we still change.

The future is a promise because the world has never ended. The future is an open question, and also our choice. I hope the vision we craft of us next is an us that takes the lessons hard learned in 2020 and applies them to build ourselves strong enough to fight all our crises, the ones of now and the ones unknown. I hope the vision we craft favours the health and well-being of people over profit because that is the only solution to the climate emergency, COVID-19, and racial injustice.

The future is ours, it is also right now, and our imaginations the only constraint.

This post originally appeared in a blog by The Elders and included an introduction by Elders Chair Mary Robinson. Republished with permission.