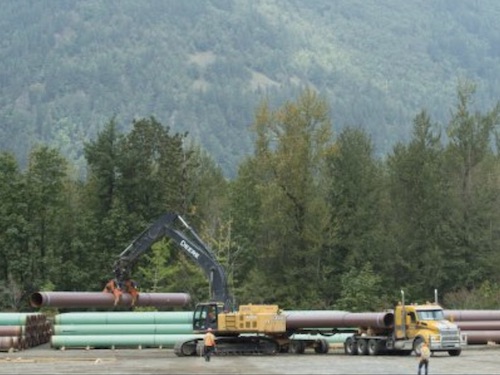 As federally-owned Trans Mountain Corporation begins to tunnel under Burnaby Mountain, and climate and Indigenous activists protest, a coalition of media outlets and press freedom groups is petitioning the B.C. Supreme Court to order the RCMP to stop using injunctions as an excuse to block reporters from protest sites.

Two days after Trans Mountain received permission to begin constructing a 2.5-kilometre tunnel beneath Burnaby Mountain, Climate Convergence Metro Vancouver staged a small, physically distanced protest in downtown Vancouver, reports the Vancouver Sun. The campaigners maintain the pipeline can still be stopped, is proceeding without Indigenous consent, and is being pushed ahead despite concerns over COVID-19 outbreaks in project work camps.

With campaigners in the province gearing up for a summer of protest once pandemic restrictions ease, basic rights around protest sites were in the spotlight last week. Even as Trans Mountain began to break ground on its new tunnel, Ricochet Media reports, a coalition of media outlets and press freedom organizations filed a court application asking that the RCMP be ordered “to provide journalists with reasonable access to police enforcement actions taking place in southwest Vancouver Island,” at the site of an old growth logging blockade near Port Renfrew, B.C.

For eight years, the RCMP has been using court injunctions against protest as an excuse to “frustrate and restrict” media access to protest sites, Ricochet says—despite a ruling by the Newfoundland and Labrador Court of Appeal which “established that journalists could not be considered in violation of an injunction when they go into an injunction zone to report on issues of public interest.”

Ricochet editor Ethan Cox said the RCMP’s own oversight body, the Civilian Review and Complaints Commission, has declared itself in agreement with the court. What is at stake in the current petition, he adds, is “nothing less than the public’s right to know.”