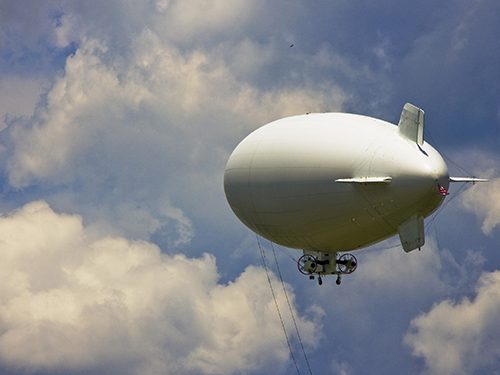 A company based in Bedford, UK says it can cut the carbon footprint of short-haul flights by 90% by replacing standard planes with blimps.

Hybrid Air Vehicles is looking at a series of possible routes for its 100-passenger, hybrid-electric Airlander 10 airship, including Liverpool to Belfast, Oslo to Stockholm, and Seattle to Vancouver. It’s hoping to start carrying passengers in 2025.

“The company said the journey by airship would take roughly the same time as aeroplane travel once getting to and from the airport was taken into account, but would generate a much smaller carbon footprint,” The Guardian reports. “HAV said the CO2 footprint per passenger on its airship would be about 4.5 kilograms, compared with about 53 kilograms via jet plane.”

Once the airships are 100% electric, their carbon footprint will fall even further, said HAV CEO Tom Grundy.

“This isn’t a luxury product,” he said. “It’s a practical solution to challenges posed by the climate crisis.”

Some 47% of regional flights connect cities that are less than 370 kilometres/230 miles apart, “and emit a huge about of carbon dioxide doing so,” The Guardian writes.

As things stand today, “we’ve got aircraft designed to travel very long distances going very short distances, when there is actually a better solution,” Grundy said. “How much longer will we expect to have the luxury of travelling these short distances with such a big carbon footprint?”

The Guardian says HAV is “in discussions with a number of airlines” about specific routes, and expects to announce partnerships in the months ahead. So far, Swedish luxury travel firm OceanSky Cruises plans to offer “experiential travel” over the North Pole with Arctic explorer Robert Swan.

Grundy expects to hire 500 people to build the airships, with another 1,500 jobs to be created across its supply chain, The Guardian says. He’s hoping to locate his company’s production line in the UK.

In 2019, Canadian author, filmmaker, and environmental visionary Silver Donald Cameron devoted one edition of his Green Interview blog to Solar Ship, a “little disruptive company” in Ontario, that was working in a similar direction.