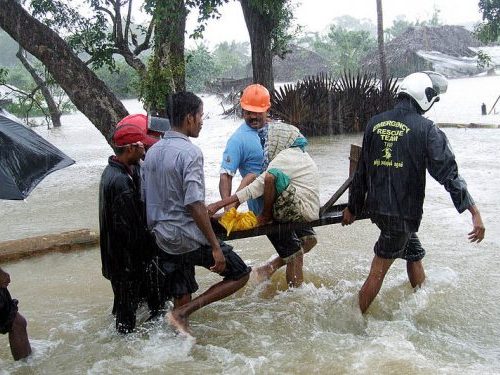 Some 30 million people around the world were displaced last year by floods, severe storms, and wildfires, making climate change the cause of three times more internal migration in 2020 than war, according to new data this week from the Norwegian Refugee Council’s Internal Displacement Monitoring Centre (IDMC).

The total number of internally displaced people (IDPs) hit a record high of 55 million, The Guardian reports, while the more than 40 million new displacements during the year set a 10-year record.

“It’s shocking that someone was forced to flee their home inside their own country every single second last year,” said the council’s secretary general, Jan Egeland. “We are failing to protect the world’s most vulnerable people from conflict and disasters.”

“Today’s displacement crises arise from many interconnected factors, including climate and environmental change, protracted conflicts, and political instability,” said IDMC Director Alexandra Bilak. “It is particularly concerning that these high figures were recorded against the backdrop of the COVID-19 pandemic, when movement restrictions obstructed data collection and fewer people sought out emergency shelters for fear of infection.”

The East Asia/Pacific region “was the location of 30.3% of new displacements in 2020. Sub-Saharan Africa was the second worst-affected region, accounting for 27.4%,” The Guardian says. Afghanistan led the list of countries with citizens displaced by disasters, with 1.1 million, followed by India with 929,000 and Pakistan with 806,000.

There were 6.6 million people displaced by conflict and violence in Syria, 5.3 million in the Democratic Republic of Congo, and 4.9 million in Colombia, with 10 million around the world added to the list last year.

“Every year, millions of people are forced to flee their homes because of conflict and violence,” the IDMC report stated. “Disasters and the effects of climate change regularly trigger new and secondary displacement, undermining people’s security and well-being.”

The organization added that “the scale of displacement worldwide is increasing, and most of it is happening within countries’ borders.”

The total group of internally displaced people included 20 million children under 15 years of age and 2.6 million adults over 65, the IDMC reported, most of them living in low- and middle-income countries.