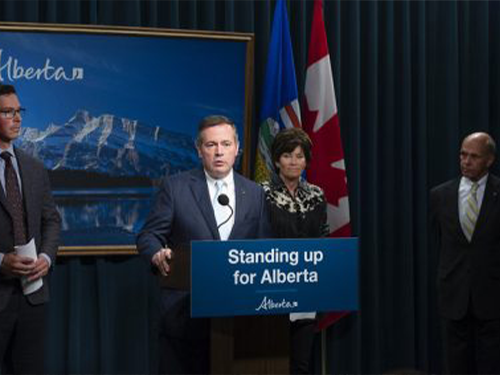 Alberta’s inquiry into the funding of oil and gas industry critics is getting its fourth deadline extension.

“In my time in public service, I can’t ever recall a public inquiry that has come in on time,” he said during a news conference Wednesday. “People who dig deep into these issues often need more time.”

Kenney did not specify how much more time Allan was given, but Energy Minister Sonya Savage said cabinet approved the extension until July 30.

Allan, a forensic accountant, was tapped in 2019 to lead the inquiry with an initial budget of C$2.5 million and a July 2020 deadline.

The deadline was extended last summer, and Allan was given a $1-million budget increase.

Since then, three more extensions have been granted. And now, officials are blaming the legal efforts of environmental law firm Ecojustice to have the inquiry thrown out.

“No additional funding was requested by the commission, and no increase is being provided,” Savage said in an emailed statement Wednesday on the latest extension.

“Our government promised Albertans that we would fully investigate the widely reported [and thoroughly debunked—Ed.] foreign-funded campaign to landlock our resources and we are committed to fulfilling that promise.”

Court of Queen’s Bench Justice Karen Horner said Ecojustice failed to prove the inquiry was called to intimidate charities that have raised concerns about the industry’s environmental impact.

She also said the inquiry is within the province’s jurisdiction and there’s no reason to believe that the political context around it suggests it’s biased.

Given the judge’s focus on political context, it’s probably a good thing for Kenney that she didn’t hear the utterly unbiased conclusions he’d reached about the lawsuit until after she dismissed it.

“The public inquiry was the target of the classic lawfare harassment campaign from green left special interests who receive foreign funding and desperately want to avoid the transparency that the inquiry is designed to bring,” he said.

“Their frivolous lawsuit perfectly confirmed why we need that transparency, why we need to shine a spotlight on the foreign source of funds behind the campaign to landlock Canadian energy because that campaign has cost tens of thousands of jobs and economic devastation for so many Alberta families and businesses.”

This report by The Canadian Press was first published May 19, 2021.