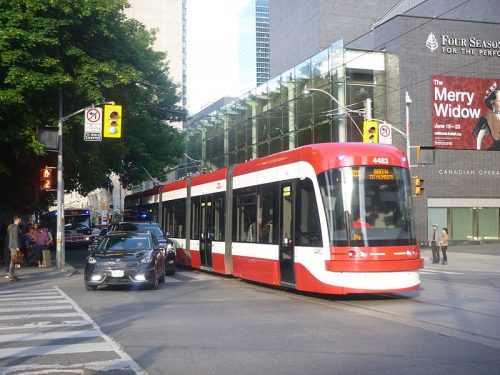 The Trudeau government is getting a thumbs-up from the Globe and Mail editorial board after announcing more than C$12 billion for major transit projects in Toronto and Hamilton.

The streetcars will be built at the Alstom automotive plant in Thunder Bay, Ontario.

Prime Minister Justin Trudeau called the investment “historic”, adding that will create tens of thousands of jobs while reducing traffic congestion and pollution, CBC reports. “Rapid transit shortens commutes, which gives parents more time with their kids and ensures kids will inherit a cleaner future,” he said. “Public transit is at the heart of a strong recovery and a growing middle class.”

“We pushed hard for better outcomes for residents in local communities,” McKenna said, adding that it took six months to finalize the plan through a process that was not always easy. To get at the federal dollars, the province and cities “will have to demonstrate how the investments will drive down emissions and require ‘substantive’ environmental reviews, community benefit agreements, and affordable housing along the lines,” CBC writes.

Ontario Transportation Minister Caroline Mulroney called the announcement an “endorsement” of her government’s $17-billion transit plan for the Greater Toronto Area, while noting that none of the new lines will be complete before 2029. Mayor John Tory said the announcement “has been a long time coming”.

CBC has more on what it calls Toronto’s “rocky history with transit”, while the Globe and Mail editorial board declares itself pleased with the announcement—despite pandemic-driven uncertainties about the future of transit.

“Lashing storms can feel permanent,” the editors write. “Thick fogs seem like they may never abate. But while the pandemic will not be easily forgotten, it will end, and transit will still be an essential pillar of Canadian cities. With climate change and population growth, it will also become a more important one.”

That means a $12-billion+ investment in Greater Toronto and Hamilton “is exactly the right thing to do. The Golden Horseshoe, home to more than one-fifth of the country’s population, needs better transit, and these investments will generate decades of benefits. This is not about the dark spring of 2021. It’s about 2041, and 2051.”