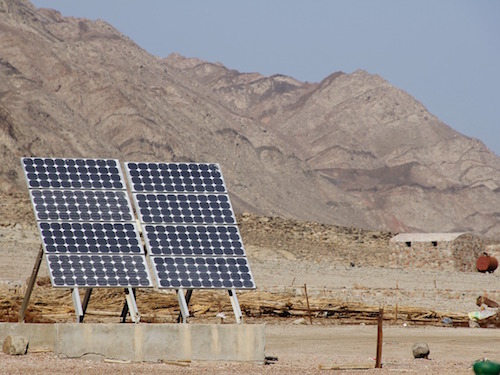 An “unlikely solar revolution of sorts” is taking place in Idlib Governate, a rebel-held province in northwestern Syria, where local residents are turning to a cheap electricity source they can count on in the midst of a brutal, 10-year civil war.

“Solar panels, big and small, old and new, are seemingly everywhere,” the New York Times reports, “rigged up in twos and threes on the roofs and balconies of apartment buildings, perched atop refugee tents, and mounted near farms and factories on huge platforms that rotate to follow the sun across the sky.” The photo accompanying the story shows panels perched atop buildings that have taken severe damage in attacks by government forces.

“Many in the West view solar panels as a sign of affluence,” the Times writes. “But the solar boom in northwestern Syria is unrelated to fears of climate change or a desire to reduce a carbon footprint. It is the only viable option for many in a region where the government has cut the power and where imported fuel for private generators is far beyond most people’s means.”

“There is no alternative,” solar panel importer Akram Abbas told the Times. “Solar energy is a blessing from God.”

“It is important,” said Radwan al-Shimali, whose family took care to pack its 270-watt panel after the Syrian government attacked their village, forcing them to evacuate. “When there is sun during the day, we can have light at night,” he said.

The panel is the household’s only source of electricity.

After Idlib emerged as a rebel stronghold in the civil war, the government of President Bashar al-Assad simply took the area off a national grid powered by oil and gas plants and hydroelectric dams, the Times says. “At first, locals resorted to generators: small, gas-powered units for shops and large diesel engines to electrify whole apartment buildings,” with most of the supply coming from oil wells controlled by the Islamic State. The locally-refined product was dirty and inefficient, and “the perpetual roar and noxious smoke from the generators became part of life in rebel-controlled towns.”

After the Islamic State lost its last foothold in Syria in 2019, the cost of fuel more than doubled, and “that price spike pushed customers into the arms of solar power,” The Times says, citing solar+battery provider Ahmed Falaha. His best seller? “Canadian-made 130-watt panels that had been imported into Syria after a few years at a solar farm in Germany,” selling for US$38 each.

The Times has more on the different applications for solar in Idlib, from a single panel on a tent in a refugee camp to a $30,000, 112-kilowatt array to power a farm irrigation system.