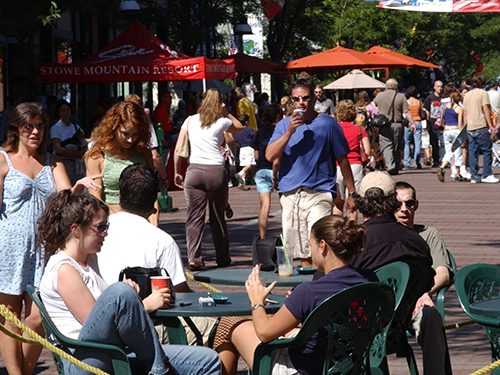 As America’s cities begin to reopen, a new Yelp analysis is putting economic weight behind calls to make the temporary “slow streets” that many cities put in place during the pandemic a permanent feature.

“A survey of 43 member cities of the National Association of City Transportation Officials found that 22 were planning on making COVID-era traffic changes permanent, while 16 more were considering it,” reports Bloomberg CityLab.

Among the keenest to make the pedestrian-friendly streets a permanent fixture is New York City, which wrote its Open Streets program (“the most extensive in the U.S.,” notes CityLab) into law at the end of April.

The Yelp study puts paid to the entrenched restaurant industry view that customers will only eat where they can drive to, and park in front of.

Drawing from page views, posted photos, and reviews of restaurants in Boston, San Francisco, Burbank, Boise, and Chicago, “all of which had slow streets programs that blocked vehicle access in 2020,” the Yelp analysts found that “eateries in car-free areas saw more consumer interest…when their streets were strictly limited to pedestrians and cyclists.”

“We want communities to understand where there are great places to do business and actually have businesses receive those benefits,” said Justin Norman, Yelp’s vice president of data science. “More broadly, as local governments and policy-makers carve out policies that enact safer streets, we hope this information adds value to that.”

A particular case in point, writes CityLab, is Valencia Street in San Francisco’s famous Mission District, whose eateries “saw 18% more consumer interest on car-free days compared to the start of the pandemic.”

CityLab adds that Valencia’s periodic (and still-ongoing) transformation into a pedestrian thoroughfare “also seemed to bolster overall consumer interest in the area: even on the days when the street remained open to vehicles, Valencia restaurants still saw an 17% increase in their share of citywide consumer interest.”

CityLab notes that the study only looked at restaurants, “not other kinds of businesses”—and that Yelp’s user base skews “younger, more highly educated, and more affluent than the U.S. population, which means its metrics are not a reflection of all consumer activity.”

But backing the Yelp results, CityLab notes, is a “first-of-its-kind national study of the economic impacts of cycling and pedestrian street improvements along 14 corridors in six U.S. cities,” conducted by Jenny Liu, a Portland University urban studies and planning professor. The study found that, contrary “to oft-heard fears by shop owners that replacing vehicle parking will dry up customer traffic,” opening up streets to pedestrians and cyclists either made a positive difference to sales and employment in local shops, or made no difference at all.

Ending Daily Commutes Could Save Canadian Office Workers $3,000 to $6,000 Per Year