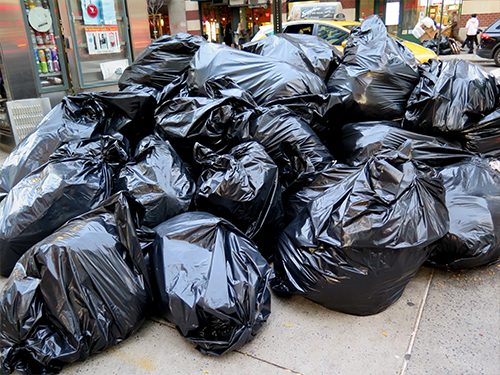 Efforts by the world’s largest producer of plastic trash bags to create a lower-carbon product have analysts asking questions about the roles government, consumers, and fossil producers will play in the war on plastic waste.

“Given that the company currently manufactures 90% of the world’s drawstring plastic bags, this is a substantial initiative.”

Containing 35% less LLDPE than traditional plastic bags, thanks to the addition of a plant resin made from corn, potatoes, and cassava, CMD’s bags have a ready-made market in places that already mandate plastic bags with lower carbon content. With such mandates already in place in Europe and California, IEEFA Finance Director Tom Sanzillo writes that CMD is “working to deepen its market share in Europe and introduce the new mix more broadly in the United States.”

The company’s long-term goal is to create a bag made of 100% plant-based resins.

As for its current product, CMD claims that, in addition to its improved green credentials, the new bags are “thinner, stronger, and cheaper,” without requiring a substantial overhaul of existing manufacturing systems.

But whether this is the best path forward is not yet clear. “CMD’s plan brings a number of critical industry and public policy questions front and centre,” Sanzillo notes. First among those questions is whether mixed resin bags truly represent progress, given the ongoing efforts to rein in single-use plastics.

“Do efficiency measures that can reduce costs, improve product quality, and result in lower-carbon emissions create conditions for an increase in plastic bag production—and with it, a potential for greater amounts of plastic bags in the waste stream and oceans?” Sanzillo writes.

On the positive side, Sanzillo asks if, contrary to the oft-circulated claim that government content regulations impair investment, CMD’s example might show how such intervention “might speed up a cost-saving innovation that can attract investment and create jobs.”

An even bigger question, with billions of dollars (and the health of millions) at stake: “As cost-conscious plastics manufacturers find that alternatives to fossil fuels are commercially viable, does the potential diminution of demand for fossil fuel resins undermine margins for fossil-based merchant cracker plants, existing ethane-driven petrochemical complexes, and proposed fossil fuel-integrated facilities?”