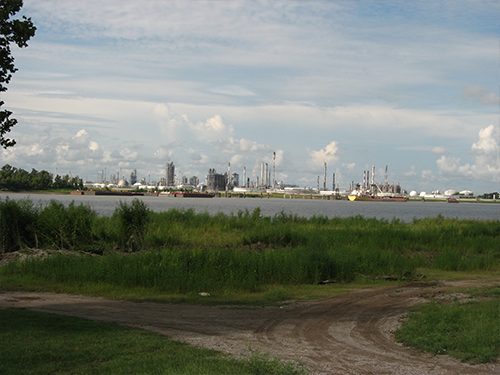 Louisiana is sending mixed signals on climate action, with Governor John Bel Edwards (D) setting up a task force in support of his pledge to achieve carbon neutrality by 2050 while legislators push to make the state a “fossil fuel sanctuary.”

Long reliant on oil, gas, and petrochemical production, Louisiana is also in the crosshairs of the climate crisis, with residents increasingly suffering from heat waves, hurricanes, and flooding, writes National Public Radio.

Edwards cited such intensifying suffering earlier this month as he announced his plan to ramp up Louisiana’s climate response, and to have his state join the U.S. Climate Alliance. “Our kids are counting on us,” he said at the inaugural meeting of his new Climate Initiatives Task Force. “If anyone can identify innovative and sustainable solutions for our future, it’s Louisiana.”

At the Climate Alliance launch, Edwards affirmed climate action as a regenerative move, not a reactive one. “Taking action to address climate change can strengthen our communities and our economy,” he declared.

What isn’t clear, writes NPR, is whether Edwards’s climate commitments “can overcome political and industry pushback” from powerful lobbyists—and from peers across party lines who have deep-rooted connections to the fossil industry.

Working in the plan’s favour is the fact that Louisiana’s dependence on fossil fuels for its GDP has dropped over the past 40 years. “It’s now just under 20%, half of what it was in the 1980s,” reports NPR.

Proof of that shift: the impending closure of a major Shell Oil refinery on the Mississippi River, and attention from several renewable energy giants, which have signalled their interest in the state.

Even so, Louisiana remains “the fifth-largest carbon-producing state, and its petrochemical industry has been growing in recent years,” says NPR. And while the state has continued to prop up oil and gas with incentives and tax breaks, it has actively “made it hard for wind and solar companies to operate or develop.”

Then there is the ongoing pushback from fossil interests. “You don’t necessarily need to choose between [fossil] energy production and being carbon neutral,” insisted Tyler Gray, president of the Louisiana Mid-Continent Oil and Gas Association—and a member of Edwards’ new climate task force.

Gray and his fellow lobbyists are now pushing hard for a slower transition to clean energy, pressing for technologies like carbon capture as a path to reconciling the seemingly opposing goals of achieving carbon neutrality while continuing to produce and burn fossil fuels. Edwards himself “seems to be walking that same fine line,” NPR notes, citing the governor’s recent comment that oil and gas “have decades left” of relevance.

And indeed, “just 4% of Louisiana’s total energy production currently comes from renewables like biomass, hydroelectric, and solar, putting it far behind neighbouring states Georgia and Texas.”

Edwards will also have to contend with resistance among legislators, with representatives from both sides of the aisle now introducing bills to block President Joe Biden’s efforts to rein in the fossil industry, including a pause on new oil and gas leases on federal lands and waters.

The Guardian writes of recent efforts by Republican state representative Danny McCormick to introduce a bill that “would establish Louisiana as a ‘fossil fuel sanctuary state’ and ban local and state employees from enforcing federal laws and regulations that negatively impact petrochemical companies.”

McCormick is pursuing his legislation even though his own constituents are known to “breathe some of the most toxic air in the country,” The Guardian adds, citing the Toxic Release Inventory maintained by the U.S. Environmental Protection Agency (EPA). Case in point is the city of Shreveport, whose majority Black population “is in the 90th to 95th percentile for cancer risk from breathing in air toxics.”

The bill has now been tabled due to concerns over its unconstitutionality, but it’s far from dead. In defense of the legislation, McCormick pointed to Biden’s moves to regulate the oil and gas industry, framing them as an ideological assault.

“We already know what the game plan is,” he said. “They already picked off coal. Now they’re going after oil and gas.”

McCormick, a former fossil lobbyist and current owner of a South Carolina-based oil company, has put forward another bill that “would redefine gas pipelines from modes of transportation to facilities, in order to prevent Louisiana state police from fining pipeline companies for failing to immediately report gas leaks,” The Guardian notes.

And then there are Edwards’s own actions, which hardly serve to advance his pledge to get serious on climate. Citing a story in The Huffington Post, The Guardian says the governor recently wrote to Biden—a letter that included “petrochemical lobbyists’ talking points”—with his own pushback against Washington’s plans to regulate oil and gas.

Such efforts to double down on the status quo should not take away from the significance of the Louisiana governor’s establishment of his climate commission, however. The task force will now proceed “to explore the potential for electric cars, mass transit, solar power, and offshore wind turbines in the Gulf of Mexico,” NPR writes, taking guidance from a diverse membership that “includes scientists, state administrators, academics, oil industry representatives, and environmental advocates.”

The new commission is a “major, historic step forward,” Monique Harden, policy expert with the Deep South Center for Environmental Justice, told NPR. “It’s the first time any Louisiana governor has put the words ‘climate initiative’ and ‘task force’ together in one sentence.”