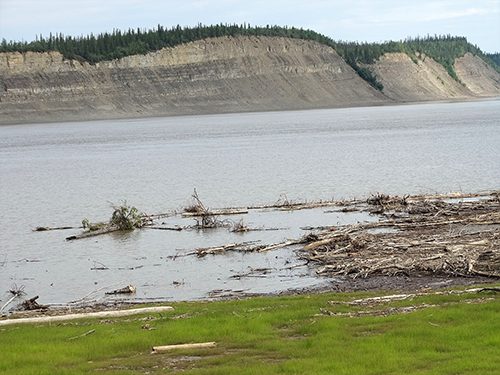 As extreme seasonal flooding hits riverside communities in Canada’s Northwest Territories, the region’s small towns are stepping up to help each other.

Ice jams on the Mackenzie River forced 12-year-old Shaylyn Hope and her family to flee their home in Jean Marie River, population 70, and take refuge in the town of Fort Providence, reports CBC News. “It’s not like me to be scared about not being home, but this is just scary and I’m not used to it,” said Shaylyn. “I’ve never been in a flood before.”

Shaylyn and her nine-year-old sister Kierstyn were among the first to raise the alarm when they realized the waters were rising.

“We told everyone and then they started freaking out,” said Kierstyn.

Chief Joachim Bonnetrouge of the Deh Gah Got’ie First Nation in Fort Providence told CBC his “very welcoming” community will do everything it can to help out the evacuees. “It will be a bit of a challenge, but I think we’re up to it,” he said.

Jean Marie River isn’t the only community at risk. Chief Stanley Sanguez told CBC that while water levels have stabilized in Jean Marie, the downstream community of Fort Simpson is still under threat. That town, whose 700 residents have also evacuated, is located on an island at the confluence of the Mackenzie and the Liard rivers.

“The Liard has flooded the town and once the Mackenzie ice breaks, there’s concern that things may get much worse,” writes CBC.

Shaylyn Hope said the experience has been “really emotionally wrecking,” adding that “I just love everything there, because it’s really beautiful.”

Dene National Chief Norman Yakeleya told CBC the situation is “unprecedented” for a community that is “getting hit with a double whammy of the flood situations and…COVID-19.”

In a separate report, CBC describes the overwhelming response from communities in the region. Yellowknife resident Melaw Nakehk’o, for example, drove more than a thousand kilometres to Jean Marie River and back “to bring a tent to a displaced Elder.”

That local support has been in stark contrast to official responses that have been thin on the ground, Nakehk’o said, adding that it’s time for officials with more disaster relief experience to take over from tired volunteers who are also grappling with loss. “Isn’t that somebody’s job in the Northwest Territories, to go in and make sure people’s essential needs are met?” she asked.

Former Fort Simpson resident Patrick Scott, who remembers the devastation of flooding he experienced there in 1989, has launched a fundraiser in support of the village. He is also urging the government to declare a state of emergency for the region, to better allow for the distribution of aid and supplies.

But as no such declaration has yet been made, said Scott, it seems like the government’s priories are elsewhere.

“There’s a preoccupation with the COVID outbreak in Yellowknife,” he told CBC. “They can’t see the forest for the trees.”

As of mid-May, Yellowknife authorities have outlined a flood response, including a move to provide immediate air support for evacuees and emergency supplies, and a promise to assess damage once the water levels recede.

“The territory is already in talks with Ottawa to find out how they can contribute,” writes CBC.