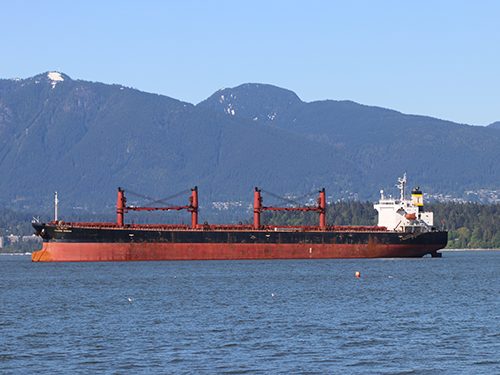 A shipping pilot’s recent decision to guide an oil tanker through British Columbia’s navigationally tricky Active Pass has highlighted a legal gap that may be putting the Salish Sea at risk—along with human lives.

While it’s not illegal to transport oil through the dangerously narrow and twisting marine passage through Southern B.C.’s Gulf Islands, commercial transport ships have been avoiding the route for 50 years, ever since a fatal 1970 collision between a freighter and a ferry, reports The Tyee.

This tacit rule was broken in April, however, by the Liberian tanker MV Kassos, which made two trips through the pass: first empty, en route to the Imperial Oil terminal in Port Moody, then fully loaded, bound for Los Angeles with some 40,000 barrels of oil.

Barry Swanson, co-founder of the Salish Sea Orca Squad, was at home on Galiano Island, scanning the waters in the hopes of sighting some of the transient or resident killer whales that frequent the area. Then he glimpsed, and photographed, the MV Kassos on the move through a waterway which is famous for its rip tides, fierce currents, and blind corners. The sight, he told The Tyee, was extremely unusual.

“When you have a tanker travelling through these waters…there is always tremendous danger with dangerous goods being spilt in any amount,” he said. “It would be a disaster for that to happen.”

Swanson contacted Gerald Graham, a local marine oil spill expert, to ask if the route was even legal for tankers.

“The short answer to that question is yes,” The Tyee writes. Pacific Pilotage Authority CEO Kevin Obermeyer confirmed in an email that while commercial transport pilots generally avoid Active Pass, there is no explicit law against it. Ships over 350 tonnes must use a pilot, contracted by the authority from BC Coast Pilots, to navigate the province’s south coastal waters.

“Pilots must follow the loose guidelines under collision regulations of the Canada Shipping Act and most large ships stick to a traffic separation scheme in waters heavily used by commercial boats,” reports The Tyee.

As for what brought the MV Kassos and its local pilot into Active Pass in April, Obermeyer pointed to pressure to save time and money.

At issue, he explained, is a safety measure requiring that all pilot shifts be capped at eight hours to prevent exhaustion from leading to accidents. Such a measure means that, on any trip expected to take longer, there will be two pilots on board. In the case of the Kassos, the pilot chose to take Active Pass rather than the standard and far safer Boundary Pass in order to shorten the journey after they miscalculated the tides and risked breaching the eight-hour limit.

In light of the public’s concern, Obermeyer told The Tyee the Pacific Pilotage Authority will immediately issue an internal notice “that will stop liquid bulk carriers under pilotage of any size transiting through Active Pass unless it is for some unforeseen emergency.”

Karen Wristen, executive director of the Living Oceans Society, told The Tyee that such a vow carries no legal weight—just like the “agreement” made 50 years ago.

“It’s nice of the Pilotage Authority to recommend to their pilots that they avoid Active Pass, but they can’t make them avoid it, and if the ship’s master and the pilot both want to save time and money, they will take the pass,” she said.

While the notice is a “fantastic step in the right direction,” the fact that it is only an internal guideline means the public will be unlikely to notice or report infractions, Graham added.

In an email to The Tyee, Transport Canada said it has no plans to restrict marine traffic through Active Pass, nor to update safety measures. It will, however, “continue to monitor high traffic areas on the B.C. coast, including Active Pass, and will address issues if and where necessary.”

Describing that stance as “shocking,” Wristen warned that a reactive stance to oil tanker safety in the Gulf Islands is dangerous.

“A single oil spill in Active Pass would be carried so far, so fast on the high currents there that ‘cleanup’ would be impossible. It would foul beaches throughout the Salish Sea, impact the southern resident killer whales and their critical habitat and countless other marine species,” she said. “It would impact fisheries and tourism for decades to come.”