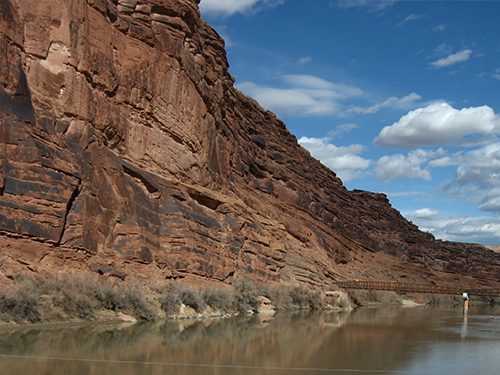 As a megadrought deepens across the Colorado River Basin, the Indigenous nations of the region are seeing hope for real change after decades of water inequity.

Basic access to clean running water is simply a given for most majority-white communities in the United States—but not for many of the country’s Indigenous communities, writes Grist. “Native American households are 19 times more likely than white households to lack indoor plumbing… and more likely to lack piped water services than any other racial group,” Grist reports, citing data from the U.S. Water Alliance.

“We were just kids, we didn’t know why,” recalled Navajo Nation member Bidtah Becker, telling Grist how she and her siblings would get stomach ailments every time they visited family on the Navajo reservation a few hours away from where they lived. “But now that I’m an adult, I totally know why that is.”

Now, researchers are finally starting to give voice to the inequity. Published by the Water and Tribes Initiative, a first-ever report is offering a “comprehensive analysis of water insecurity among all the tribes in the Colorado River Basin.”

Laying out the extent to which Native Americans in the region “are severely impacted by lack of water infrastructure and water supplies contaminated by arsenic and other harmful chemicals,” the report demonstrates the urgent need for federal intervention and dollars, Grist says.

And as drought conditions grow steadily more entrenched in the Basin—which has seen rising temperatures and shrinking snowpack since 2011—millions of residents throughout the 637,000-square-kilometre region could be left thirsty as early as this summer. Grist says Lake Mead and Lake Powell, two key reservoirs that “store four years’ worth of water when they’re at capacity,” are down to as low as a third of their fill levels.

Things could get particularly scary for the region’s 30 federally recognized tribes, who stand in the crossfire of water access quarrels among the seven states (Arizona, California, Colorado, Nevada, New Mexico, Utah, and Wyoming) that depend on the Colorado for irrigation, hydropower, and drinking water while the river itself slows to a fraction of its former power.

While “on paper” these communities have rights to 20% of the Colorado’s annual flow, “in practice, tribes in the basin only have access to a tiny fraction of the river’s water, despite the federal government’s fiduciary responsibility to protect tribal treaty rights and resources,” writes Grist.

“In order to turn paper rights into permanent wet water rights, tribes have to enter into a complicated legal process called a water settlement with the federal government, states, water districts, and private users.” The settlements are lengthy, expensive, and require the authorization of the U.S. Congress.

All of this is why the authors of the Water and Tribes Initiative report are calling for a “whole of government” approach to this crisis. Under such an approach, explains Grist, “the federal government could establish an interagency working group dedicated to increasing water access among tribes. It could remove the red tape around the approval process for water infrastructure projects on reservations. And, most importantly, it can direct more funding to the issue.”

The U.S. Senate’s recent success at passing the bipartisan Drinking Water and Wastewater Infrastructure Act could be a first step in securing that funding. Grist notes that, should the act make it through the House, it “would direct US$35 billion to states to update and repair their wastewater and drinking water infrastructure,” with about 40% of the funds earmarked for  “small, disadvantaged, rural, and tribal communities via states or direct loans from the federal government.”

Then there is the Drought Relief Working Group, created by Interior Secretary Deb Haaland, “the first-ever Native American cabinet secretary and a member of the Laguna Pueblo tribe, one of the 30 tribes in the Colorado River Basin,” notes Grist. The group’s mandate is to solve Western water issues “without leaving tribes behind.”

Berggren told Grist that to truly achieve water sustainability in the basin, these initiatives must be undertaken alongside holistic efforts to conserve water. “Encouraging municipal water conservation, recycling wastewater, improving irrigation efficiency on farms that draw from the river, and taking other similar measures could save the West millions of acre-feet of water—ensuring that there’s more water to go around,” Grist writes.