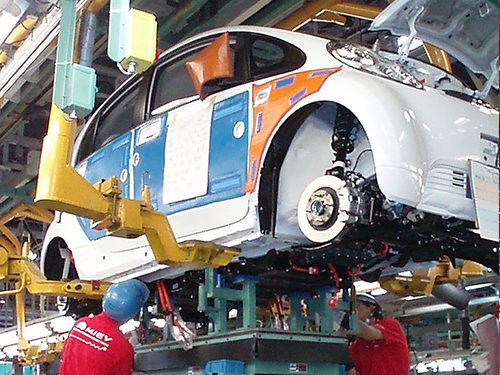 Critical shortages in skilled labour and affordable housing are threatening to derail Canada’s plan to reduce national emissions—and, with it, the promise of sustainable economic growth.

While Prime Minister Justin Trudeau has committed to cut emissions by as much as 45% from 2005 levels by 2030, such plans will be derailed unless policy-makers address the lack of trained labour necessary to bringing that plan to life, write Smart Prosperity analysts Mike Moffatt and John McNally in a recent op-ed for Maclean’s.

And even with a ready supply of people skilled in trades like electric vehicle assembly, say the authors, the country would still face a second bottleneck in its climate ambitions: sky-high housing prices, especially in the communities where much of the manufacturing required for the low-carbon transition will take place.

“This level of climate action is going to create too many jobs,” write Moffatt and McNally. “If Canada wants to grow the economy, it needs to make sure it has the labour force and housing supply it will need to meet its climate targets.”

It’s a twist of a situation, where what would typically be good job-creating news may actually translate into a massive challenge. “Every zero-emissions technology we will adopt has to be designed, and then each part built, assembled, installed, and maintained,” the authors explain, adding that widespread building retrofits will require even more skilled tradespeople. In fact, every stage of the climate plan will create jobs, from resource production to manufacturing, and from logistics to installation and maintenance. But “whether Canada can take full advantage of the growth opportunities offered by this level of climate action” depends on whether the regions that do the manufacturing can attract the people they need.

“The bulk of Canadian manufacturing takes place along the Highway 401–Autoroute 20 corridor that stretches from Windsor to Quebec City, and this is unlikely to change,” they write, since industry naturally gravitates to where key suppliers, manufacturing, and distribution infrastructure are already present. But housing prices in that corridor are already well beyond the reach of a worker who might otherwise be happy to relocate.

With a hypothetical (or not-so-hypothetical?) EV plant in Oakville, Ontario as case in point, Moffatt and McNally describe the careful calculus a company would need to engage in before setting up shop, first and foremost determining whether they could pay enough to compete with other employers, and with cheaper cities.

With the median house price in the corridor having risen by 128% since 2010, the answer may be no. “The National Bank of Canada’s Affordability Index identifies that an annual household income above $170,000 is now required to afford a representative Greater Toronto and Hamilton Area home,” note the authors. Unless that EV manufacturer could afford to pay such a salary, “it will have greater trouble attracting the skilled work force it needs.”

If this urgent housing and skilled labour shortage is not addressed, all that green job creation is going to happen somewhere else, warn Moffatt and McNally—like in Houston, where real estate is cheaper.

“That would be a tragedy, and an ironic one at that,” they write. “Canada’s economy is about to undergo so much growth that it is literally going to run out of workers and have to start exporting jobs.”