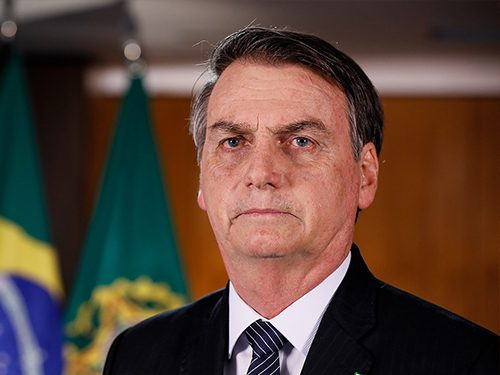 Defenders of the rainforest are watching with trepidation—and, for some, horror—as the Biden administration contemplates a climate deal with Brazilian president and “climate-scoffing populist” Jair Bolsonaro, aka “Capitão Motoserra” (Captain Chainsaw).

Reporting on the diplomatic effort currently ongoing between Washington and Brasilia, Politico offers a succinct assessment of all that is at stake: “Much of President Joe Biden’s ambitions to save the planet comes down to a delicate dance: Can he cut a deal with the Brazilian leader whose allies are slashing and burning the Amazon?”

For many Brazilian critics of the Bolsonaro regime, the question isn’t so much whether Washington can broker a deal, but whether it should. “Bolsonaro is a bulldozer, and [Environment Minister Ricardo] Salles is a chainsaw. You won’t stop them by treating them with money,” said Carlos Rittl, a senior fellow at the Institute for Advanced Sustainability Studies in Potsdam, Germany, and a former director of the São Paulo-based Climate Observatory.

Washington clearly shares this assessment, at least to some degree, having indicated that Bolsonaro’s recently floated notion that the U.S. should pay Brazil an annual US$1 billion in return for non-enforceable pledges to halt deforestation is a non-starter.

But not engaging with Bolsonaro isn’t an option either, explains Politico. That’s because the current leader of Brazil “holds the keys to 60% of the Amazon, a crucial resource that absorbs 5% of the world’s annual carbon dioxide emissions,” even as it tips from its previous role as a carbon sink to become a net carbon emitter.

Laying out all the stakes, the news outlet adds that unless Biden’s climate envoy, John Kerry, “can find a way to save the Amazon, whose forests shrank 10,000 square kilometres between August 2019 and July 2020 in Brazil alone, there may be little chance that the world will reach the targets set out in the Paris Climate Agreement.”

The path to saving the Amazon, and with it, a livable climate, runs straight through Bolsonaro, and based on comment from an unnamed insider, Politico says Biden’s negotiating team knows that it “really can’t afford to just wait for the next guy.”

And while a cool billion for hollow promises is not in the cards, “money may be the only way to persuade Bolsonaro.” Conduits for funds currently under discussion by American and Brazilian diplomatic teams include “a multilateral carbon market that would allow Brazil and other Amazon nations to sell carbon credits to oil companies and other corporations to offset their greenhouse gas emissions.”

But even the act of entering into discussions has provided Bolsonaro with something else he desperately needs: cover from rising public anger, mostly for his tragic failure to lead on the pandemic, but also over his willingness to sacrifice the Amazon.

“The U.S. strategy could be summarized as engagement and containment, a term those familiar with the talks used to describe [climate envoy John Kerry’s] attempts to temper a Bolsonaro economic agenda that depends significantly on expanding forest clearing for agricultural allies,” writes Politico. On the Brazilian side, one anonymous official said that “unless the Americans want to pretend they’re naïve and accept some false promises,” little in the way of a serious agreement is likely.

But while Bolsonaro is likely to persist in his devastating agenda for the Amazon, a number of state governments are moving to fill this leadership vacuum. They include Mato Grosso, “home to both major agricultural operations and vast areas of rainforest.” Alongside two other Brazilian states, Mato Grosso has signalled its interest in participating in “an emerging $1-billion public-private partnership endeavour called the Lowering Emissions by Accelerating Forest Finance, or LEAF Coalition.”

While there are concerns Bolsonaro might feel slighted should Washington get involved in brokering any kind of side deals with the states, some think money will soothe the hurt.

“I don’t think the federal government would oppose anything that brings resources into the country,” the anonymous U.S. insider told Politico.