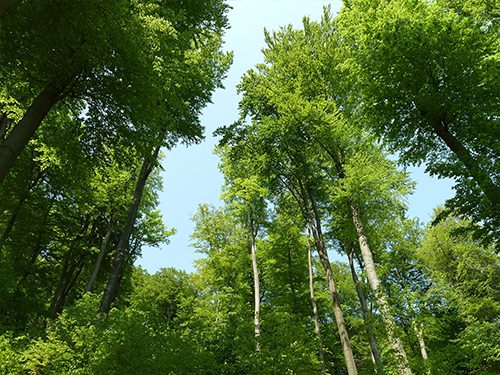 The deciduous trees that are replacing conifers in the northern boreal forest may help slow the dangerous feedback loop that is now fuelling intense Arctic fires.

“Deciduous trees store more carbon, and they don’t burn as quickly or a severely as dry, resinous black spruces and their needles do,” write Jill Johnstone and her research team in a post on The Conversation. Johnstone, an environmental biologist at the University of Saskatchewan, is lead author of a study published last month in the journal Science that shows the trees may act as “a natural brake” on the dangerous cycle that has seen burning forests release more carbon, which further speeds global warming.

The research suggests the emergence of broadleaf deciduous trees as the dominant species in northern forests could be buying the climate a bit of breathing room. Aspen and birch “store carbon at a rate that is four times faster than in similarly aged black spruce stands,” an accumulation rate that, over 50 years, could compensate for the devastating release of carbon that happens when intense black spruce forest fires “burn deep into the soil layer,” where those species store most of their carbon.

Indeed, writes Johnstone, it is possible that the incursion of deciduous trees into the boreal forest could end up delivering a net carbon gain over the long term. “By the time deciduous forests are 100 years old, the typical interval between burns in this region, carbon pools are 1.6 times larger than in black spruce forests,” she reports.

Deciduous forests burn more slowly, too, and fires in these forests are easier to put out, in part because the trees lack the highly flammable resin that fuels conifer fires. Johnston says this change is “likely to translate into smaller, less severe fires.”

What remains unknown, however, is “how long deciduous forests’ lower flammability will persist as the climate warms.” Affirming her findings as anything but a get-out-of-jail-free card, Johnstone warns: “There likely is a threshold at which even resistant trees will readily burn,” taking with them any mitigating effect on the climate-wildfire cycle.

In 2018, CBC an equal and opposite story in British Columbia, where the provincial government was using the toxic herbicide glyphosate to wipe out broadleaf trees that could act as a brake against epic wildfires.

“The eradication of trees like aspen and birch on regenerating forest stands is meant to make room for more commercially valuable conifer species like pine and Douglas fir,” the national broadcaster explained at the time. “But experts say it also removes one of the best natural defences we have against wildfire, at a time when our warming climate is helping make large, destructive fires more and more common.”