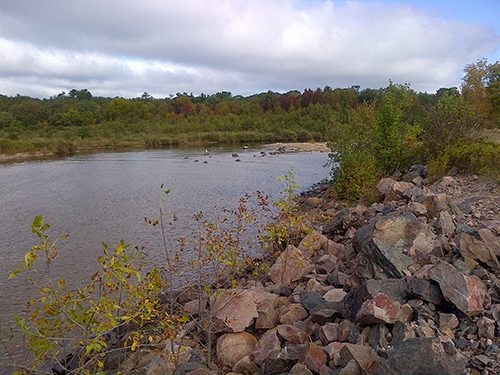 John Bacher, an executive member of Sierra Club Ontario, and Danny Beaton, a Mohawk of the Turtle Clan, describe Ottawa’s just-launched environmental assessment of a planned 120-kilometre road to the mining belt project as “the thin green line” between the Ford government and “one of the world’s biggest refrigerators”. They write that moving forward with the Ring of Fire risks turning some 35 billion tonnes of cool peat into a climate catastrophe, “spewing forth some of the most dangerous vapours—methane.”

The harm to the climate won’t just come from the road or the resource extraction, they add—it will also be driven by the resulting loss of the caribou, which play a critical role in keeping the region’s permafrost, and its carbon storage capacity, intact.

“Respected academic ecologists, most notably Professor Christian Beer of the University of Hamburg, have found a way to keep permafrost cool. This is to increase the numbers of grazing herbivores who browse above it,” the authors write. “These scientists’ studies have documented trampling down winter snow in a way that makes it a better insulator for frozen permafrost. In Northern Ontario, the only native animal that is capable of doing this is caribou.” Restoring regional populations of extirpated musk oxen and bison could also help in this effort, they add.

While Ontario’s caribou herds “have lost about half of their former range,” Bacher and Beaton note that a recovery plan commissioned under Canada’s Endangered Species Act is working toward the goal of a “steady, but modest increase” in the population of woodland caribou in the northeast.

But its potential for success owes to the absence of industrial development in the region—more specifically, to the absence of roads, which are a conduit for poachers and wolves, as well as ground zero for animal-vehicle collisions.

While the route for the proposed Ring of Fire road was designed in part with a view to protect the region’s peat bogs, it will run along the eskers (glacial ridges) that are “used by migrating caribou travelling from Ontario’s tundra, which serves as calving grounds, to forested wintering habitat.”

To illustrate how “catastrophic” roads can be to caribou populations, the authors point to the George River herd, which once flourished along the Quebec-Labrador border. As recently as 1990, the herd was the world’s largest, at 750,000 strong, “the dream size of ecologists to trample snow and protect permafrost.” Today, the herd is gone, thanks in substantial part to “the construction of a road through the calving grounds that was built to provide access to the Voisey Bay Nickel Mine.”

As for those who “cynically believe that global warming has doomed the caribou,” rendering conversations about roads into the Ring of Fire moot, Bacher and Beaton cite “the remarkable success of the porcupine caribou herd, safeguarded by the strong determination of the Gwitchin, on both sides of the Alaska and Yukon border.” Thanks to the banning of all roads and extractive activity from its range, the herd now stands at “around 280,000 caribou, the height of what has been historically documented.”

Decrying the (bipartisan) support in the Ontario legislature for the Ring of Fire development, Bacher and Beaton urge policy-makers to make the connection between the climate crisis, the permafrost, and any activities that would undermine the health of that frozen world.

“Caribou numbers need to expand to protect the ground under their feet,” they write.

In its own reporting on the environmental assessment for the proposed road development, CBC News writes that consultation with First Nations and other stakeholders has begun. Chief Bruce Achneepineskum of Marten Falls First Nation has hailed the road, saying in a release that, “without this project, our people will continue to live in the same underdeveloped conditions, lacking access to drinking water, housing, clothing, jobs, health care, and education.”

However, other First Nations, together with several environmental organizations, are urging a halt to any consultation or assessment until the end of the pandemic. In a letter addressed to several Ontario cabinet ministers, Eabametoong First Nation Chief Harvey Yesno catalogues the “burnout” his community faces “from a perpetual crisis-response cycle during this past year of emergency pandemic protocols, evacuation due to forest fires, ongoing boil water advisory, and housing emergency that has left 17 of our members living out in frigid tents all winter.”

“Meaningful consultation on major projects with potential impacts to Aboriginal and Treaty rights cannot occur during these emergency conditions,” he said.

In Conversation: Ottawa is Continuing Its ‘One Eye Shut’ Climate Policy, Carter and Dordi Say