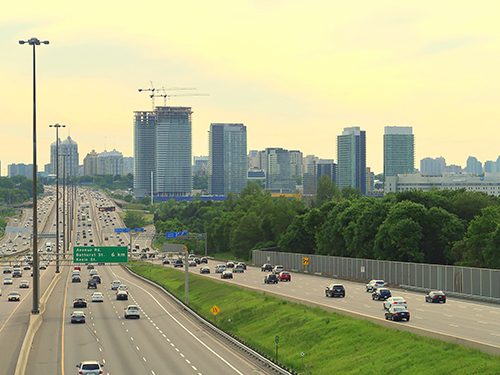 Environment and Climate Minister Jonathan Wilkinson has announced a federal environmental assessment of the Ford government’s contentious, C$6-billion plan for a new highway through the northwestern part of the Greater Toronto Area (GTA), citing “clear areas of federal concern related to this project.”

The federal government’s interest in Highway 413 focuses in part on species at risk, including the Western chorus frog, the red-headed woodpecker, and the rapids clubtail, a species of dragonfly, The Globe and Mail reports. “Environmentalists and opposition politicians have said the project would pave over environmentally sensitive areas and farmland as it runs through the communities of Vaughan, Caledon, Brampton, and Halton Hills.”

Last week, Environmental Defence Canada warned the road would increase the province’s greenhouse gas emissions by 700,000 tonnes per year by 2050, the Toronto Star adds. “The report also found the highway could cause more than a billion dollars in costs associated with air pollution, including pollution-related illnesses such as asthma and lung cancer. The estimated costs also included projected damage to ecological health and crop losses.”

The report places the road’s cumulative CO2 emissions at 17.4 million tonnes by mid-century.

The study showed that “this is a critical decision that will determine the future of the region, and how we want it to grow,” she added. “Do we want to build in a way that is more walkable, transit-oriented, or do we want to lock in people to longer commutes, that experts have told us won’t get you to your destination any faster anyway?”

The road, also known as the GTA West Corridor, “would stretch 59 kilometres to the west of Toronto, linking Highway 401 with the 410 and 400. It was scrapped by Ontario’s former Liberal government in 2018, but revived under the current Progressive Conservative government,” the Star says.

“All three opposition parties have promised to scrap the project, with the Ontario Liberals saying they would use the money for the highway to build schools and [fund] new child care spaces.”

“They didn’t want this highway in their community and they wanted the federal government to step in to do a better job of assessing what the impacts would be to their local environment,” Buchanan said. But she wasn’t confident that pressure would be enough to kill the project once and for all.

“We’ve seen it rise from the dead before,” she told CBC. “It’s ultimately in the hands of the provincial and federal governments.”

DSF analyst Gideon Forman was more optimistic, the Globe writes. “With the federal EA now, and with all these local governments coming out against the highway, there’s going to be a lot of pressure on the province to cancel the project,” he said. “And that’s what we hope they will do.”

In a statement Monday, Ontario Transportation Minister Caroline Mulroney said the project “is already subject to a robust provincial individual environmental assessment, which is among the most stringent assessment processes on record,” adding that it’s needed “to address congestion and forecasted population growth.”

But “critics argue that the planning for the highway ignored decades of science by failing to account for induced demand—the well-established principle that new or widened roads generate additional traffic—and that paving through farmland and protected green space was shortsightedly destructive,” the Globe writes. “In a recent open letter, dozens of scientists urged the federal government to conduct its own assessment of the project, noting ‘significant concerns about the highway’s impact on biodiversity and the increased greenhouse gas emissions it will foster’.”

In a release accompanying last week’s report, Buchanan said the proposed new road “has been rightly called a sprawl accelerator. 30 years after the underused Highway 407 was built, much of the farmland near the highway was converted to sprawl. We can expect the same to happen to the land near Highway 413.”