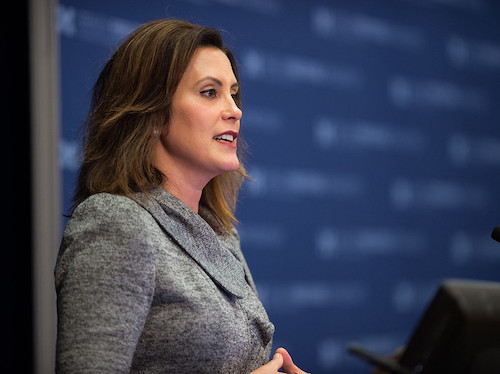 Michigan Governor Gretchen Whitmer is less than 10 days away from implementing a momentous decision to shut down a 68-year-old, underwater pipeline that her administration and many of her constituents consider an environmental hazard and an affront to Indigenous rights, but that Canadian Natural Resources Minister Seamus O’Regan has declared a “non-negotiable” irritant in bilateral relations.

Canada has been threatening to invoke a treaty that was signed in 1977 but has never before been used, barring actions that “would have the effect of impeding, diverting, redirecting or interfering” with “hydrocarbon in transit,” except in case of a natural disaster or operating emergency, the Washington Post reports. For years, Michigan has been saying a natural disaster is precisely what it’s trying to avert by taking action on the Line 5 pipeline.

“The clash over Calgary-based Enbridge’s Line 5, which carries up to 540,000 barrels of crude oil and natural gas liquids across Michigan and under the Great Lakes each day, is placing stress on U.S.-Canada ties—and raising questions about how the close allies, which have expressed a desire to work together to fight climate change, can balance energy security with the transition to a clean energy economy,” The Post writes. But Whitmer spokesperson Bobby Leddy said the governor is standing by her position that continuing to operate the pipeline past next Wednesday would be unlawful.

“These oil pipelines in the Straits of Mackinac are a ticking time bomb,” he told the Post. “Their continued presence violates the public trust and poses a grave threat to Michigan’s environment and economy.”

Whitmer’s May 12 closure order dates back to November. But as the date approaches, pressure from the Canadian government has been intensifying. “Canadian officials, including Prime Minister Justin Trudeau, have appealed to their American counterparts, including President Biden, Secretary of State Antony Blinken, and Energy Secretary Jennifer Granholm for help,” the Post says. The Canadian consul general in Detroit, former MP Joe Comartin, “predicted effects ranging from months-long propane shortages to higher costs for consumers to fuels being carried by rail, truck, or boat—methods that he said are less emissions-friendly and more dangerous than a pipeline.”

“It certainly strains our relationship,” Comartin said. One irritant, he added, is what he framed as “the claim from the state that they are doing this to protect the Great Lakes, that they’re more interested in protecting the Great Lakes than we in Canada are. Basically, we reject that completely.”

When Granholm, a former Michigan governor who the Post says was born in Canada, was asked about Line 5 during a CNN town hall last month, “she said the project was not under her purview—but had some tough words on Canada’s oil sands,” the Post recounts.

“If we’re going to do pipes, let’s do pipes that build the infrastructure of America in a way that is future-looking,” she said, “and not rely upon fuels or transport fuels—even though our neighbours to the North want it—that are not going to contribute to reducing greenhouse gas emissions.”

When Whitmer announced last fall that she was revoking a 1953 easement permitting Line 5 to cross the environmentally sensitive Straits of Mackinac, between Lakes Huron and Michigan, she cited the “persistent risk” the twinned pipeline poses to the Great Lakes and Enbridge’s “persistent” violations of the requirements in the easement. “The announcement listed several infractions, including failures to ensure that the lines are supported every 75 feet and that they’re covered by a coating to prevent erosion,” the Post writes. “It noted two incidents, in 2018 and 2019, in which the pipelines were struck and damaged by cables or anchors from boats.”

But the Line 5 saga dates back much farther (and the Energy Mix archive has got you covered, at least back to September 2015). In April 2017, the U.S. National Wildlife Federation reported that Line 5 was not aging gracefully, with a previously-undetected record of at least 29 oil and gas spills totalling more than a million gallons over the last 64 years. By July of that year, then-Republican attorney general Bill Schuette was calling for a clear shutdown timeline for the 7.4-kilometre portion of the 1,000-kilometre pipeline that runs beneath the two lakes.

Two years and one state election later, Democratic Attorney General Dana Nessel sued Enbridge to shut the line down. That action led to a flurry of court and regulatory action, a cultural assessment that found the Calgary-based pipeliner had ignored 10,000-year-old artifacts in its bid to build a C$500-million protective tunnel for the line, and ultimately, Whitmer’s November closure order.

By February, the Michigan Department of Environment, Great Lakes, and Energy (EGLE) was under fire for the way it had approved recent tunnelling permits. “Environmentalists, tribal leaders, and others who oppose the tunnel plan had urged the agency to go beyond a simple review of construction and operation impacts and consider broader questions [about] impacts on Michigan’s environment, such as the climate implications of approving new fossil fuel infrastructure,” Bridge Michigan wrote at the time.

By then, news coverage was also beginning to balance some of the claims that the Line 5 decision must necessarily pit jobs against environmental protection. Ontario Premier Doug Ford warned a closure would cost 4,500 direct jobs in Sarnia, and federal Conservative leader Erin O’Toole upped the ante to 6,500 direct and 23,500 indirect positions.  But Sarnia Mayor Mike Bradley pegged the loss at 3,000 jobs—fewer, if fossils found other ways to get their product to the city. And CBC was saying both Imperial Oil and Suncor Energy had plans to do exactly that.

Bradley still told The Post more recently that Whitmer’s opposition to the pipeline had fuelled “a lot of anxiety” in his town and done “immense” damage to cross-border relations. “She may be focused on her one issue, but the relationship between Ontario and Michigan has been set back, in my view, for decades,” he said.

In March, an assessment of potential supply gaps at two former BP refineries located in Sarnia and in Rapid River, Michigan projected a 230.1-million-gallon shortfall, but pointed to ample replacements for the Line 5 supply.

“PSC identified a number of robust and diverse alternative supply options for delivery to the Michigan market,” Public Sector Consultants (PSC) stated, in a report that identified Edmonton as the most cost-effective source of propane and calculated a premium of $0.04 per gallon over the going rate in 2019. It added that “sensitivities around energy efficiency and utilization of customer storage…provide options for reducing the impact of supply disruptions, as well.”

In that same month, a former chair of the International Joint Commission, a bilateral body originally set up to safeguard water quality under the 1909 Boundary Waters Treaty between the U.S. and Canada, said Canada’s position on Line 5 seemed to abandon a longstanding commitment to protect the Great Lakes from harm.

“The danger of a breach of this age-compromised pipeline spanning a major shipping lane in the world’s largest freshwater body increases with every passing day,” Lana Pollack wrote in a Toronto Star op ed. She warned that examination of Line 5 “shows thinning of the pipeline walls and a history of breaks in the lakebed anchors essential to keeping the pipeline tightly fixed to the lake bottom.” And, “a current jury-rigged system of bottomland attachments allows this bent and corroded pipeline to flex and float in ways it was never designed to tolerate—stresses that intensify the risk of a breach.”

Now, the Washington Post is pointing to another factor that may be driving the story. “Looming larger over the debate in Michigan is a spill involving a different Enbridge pipeline,” the paper writes. “In 2010, a rupture in the Line 6B pipeline leaked more than 20,000 barrels of oil over 17 hours into a tributary of the Kalamazoo River in Marshall, MI.”

That incident “was among the largest and costliest inland oil spills in U.S. history,” and “the [U.S.] National Transportation Safety Board found that Enbridge had not fixed cracks in the pipeline that it had noticed years earlier,” the Post adds. Enbridge received what amounted to a “slap on the wrist” for that spill, according to a 2016 news report.

Only intact forests can stave off climate change