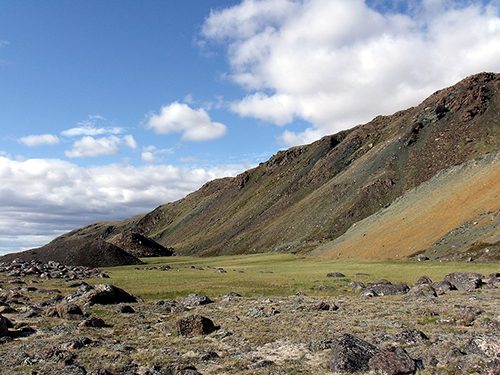 Residents of northern Labrador are having to tackle a new set of miseries as climate change delivers fog, gale-force winds, exploding black fly and mosquito populations, reduced berry crops, and even new sources of camouflage for dangerous bears.

Spring in Nunatsiavut, Labrador, is a lot more buggy than it used to be, writes CBC News. “It’s horrible,” said hunter Derrick Pottle, of the apocalyptic swarms of bugs that now torment residents of his community. “You virtually can’t breathe for them.”

Also dangerous are the impacts of global warming on the sea ice, which Pottle and other locals depend on to travel between communities and to hunt for food. The spring season for snowmobiling was at least five weeks short of normal this year, and even the ice of mid-winter wasn’t nearly solid enough for either comfort or safety.

“I’m sure there’s people still out there that [don’t] believe that climate change is happening,” Pottle told CBC. “But when you live, when your life depends on being able to work and live in harmony with nature and Mother Nature and the elements—it really impacts our lives.”

While melting sea ice is now increasingly on the public radar, other changes afflicting the North may be less so. Those include wild temperature swings, along with “weeks of seemingly unending spring and summer fog that keeps planes from landing, as well as gales of wind, night and day.”

The wildly unsettled weather is “having an impact on country food, particularly the berry harvest,” reports CBC. The flowers that precede the fruit on wild berries like bakeapples are particularly vulnerable to strong wind and rainfall, as well as to untimely heat.

Pottle said many of the ponds where he would typically hunt for birds are also drying up.

Such observations are in line “with what plant ecologist Luise Hermanutz calls her ‘rubber boot index’,” writes CBC. “When Hermanutz first started researching plant life more than a decade ago at Nakvak Brook in Torngat Mountains National Park, she and other scientists would need rubber boots to wade around.”

In the 10 years that Hermanutz has been studying plant life in the region, she and other researchers, prompted by intelligence shared by local Inuit elders, have watched shrubs like the Arctic dwarf birch sweep across the formerly barren tundra. Citing an estimate by Parks Canada ecosystem scientist Darroch Whitaker, CBC says shrub cover in the Torngats has “about tripled” over the last 30 years.

This greening of Labrador is bringing yet further risk to the people who call the region home. Noting that the incursion of the dwarf birch and other shrubs tends “to be thickest in river valleys that people often use as travel routes,” CBC reports that the consequent reduction in sightlines “can increase the chances of a run-in” with bears.

“In order to be safe around those animals, you want to have good awareness of where they are. And this shrub cover makes it really hard to detect them,” said Whitaker.

Looking ahead, Whitaker told CBC that researchers are predicting present shrub cover to double again by 2040, producing “profound ecosystem changes” that will act as “a bit of a bellwether for what’s happening all across the Arctic.” For Derrick Pottle, that prediction casts a long shadow.

“We have some major, major concerns as to what the outcome is, and how long will we be able to hold on to this lifestyle that we’re living,” he told CBC.