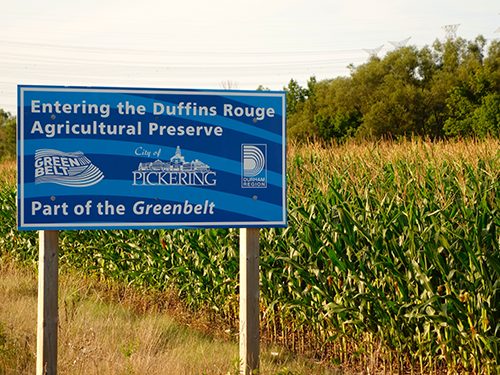 The new chair of Ontario’s Greenbelt Council is a former Mike Harris-era cabinet minister who voted against the Greenbelt itself when it was established in 2005.

The Star says the nod to Sterling “set off a new wave of criticism for the Ford government, which has frequently used ministerial zoning orders to force particular development approvals and is pushing to build Highway 413 through parts of the Greenbelt, a band of protected farmland, forests, rivers, and lakes.”

“I’ve been watching environment ministers going way back and will say without hesitation that Norm was the most anti-environmental of them all,” said Toronto city councillor Gord Perks, who campaigned against Harris-era cutbacks for Greenpeace. “The step down from David Crombie to Norm Sterling is to step down from somebody who cares to somebody who will actively wreck things.”

“Putting the fox in charge of the henhouse is classic Doug Ford,” NDP environment critic Sandy Shaw said in a statement. “Time and time again Ford has been busted trying to pave the Greenbelt as a favour to his donors. Ontarians have a right to be worried about this appointment.”

As provincial environment minister, the Star says, Sterling “faced criticism” for cutting his department’s budget 40%, claiming the loss of funds could be countered by “implementing stronger environmental policies”. A few years later, the paper recalls, “the Walkerton tainted water inquiry concluded that Harris-era cuts led to the end of lab testing for municipalities in 1996 and helped set the stage for the 2000 disaster that killed seven people and sickened thousands of others.”

Sterling’s comments to the Star sounded like an eerie reframe of his long-ago claim he could implement the right policies while cutting budgets and staffing to the bone.

“My motives are to give future generations the freedom to make decisions about where our province is going with regard to resources,” he told The Star. As for the conflicting pressures to protect the Greenbelt while accommodating the demands of housing developers, “we can do it,” he added. “We can retain the best parts of our natural resources, but we also have to be concerned about how we’re going to provide people with places to live. We’re going to have to listen to a lot of people to advise us on how we might do this.”

He added that his role as a founding member of the Niagara Escarpment Commission had helped him appreciate “the significance of land and water resources.”