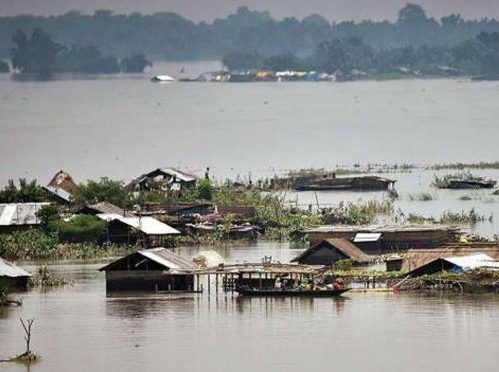 The UK’s decision to gut the budget for a key global disaster resilience research hub is putting millions of poor and vulnerable city-dwellers in developing countries at a greater risk of climate impacts like flooding and wildfire.

“The Tomorrow’s Cities program, which aims to reduce the disaster risk for vulnerable communities around the world, has had its budget cut by 70% this fiscal year, from US$6.7 million to$2 million,” reports Climate Home News. The cuts come as the UK, citing pandemic pressures, “has slashed its overseas development assistance from 0.7% to 0.5% of its national income.”

Hollowing out Tomorrow’s Cities will not only keep the program’s intended beneficiaries at greater risk. It will also take away opportunities to build community resilience, said Marina Apgar, the program’s impact lead. “In some cases, this could potentially result in direct harm to properties and livelihoods, and potentially even death,” she told Climate Home.

Noting that the program will likely have to shutter much of its collaborative work in Quito and Istanbul and scale down projects in Nairobi and Kathmandu, Apgar added that “cancelling planned collaborations across the world will damage the UK’s reputation.”

Among those who stand to lose from the funding cuts are the more than two million people who live in flood- and fire-prone shantytown areas in Nairobi. The Tomorrow’s Cities team in the Kenyan capital has been working with local officials and the British Red Cross to help the communities become more resilient to the immediate and long-term impacts of flooding.

Similar work was being pursued in Kathmandu, the slums of which “are regularly flooded due to poor drainage systems” as well as their proximity to the Bagmati River. “Without proper research to back up policy recommendations, local authorities are unlikely to adopt more resilient measures,” writes Climate Home. In the words of Dharam Uprety, the project’s team lead for Kathmandu, “this all risks being lost.”

Uprety’s dismay echoes the broader chorus of protest that followed Whitehall’s announcement of its planned reduction in foreign aid. Environmental groups warned the cuts would only worsen the climate crisis while undermining diplomatic efforts, going into COP 26, to increase support to vulnerable countries.

News of the cuts to the Tomorrow’s Cities program followed a report from Sky News that the UK government would be clawing back 80% of its 2021 funding for overseas water and sanitation projects, funding upon which key charities like Water Aid depend, Climate Home adds.