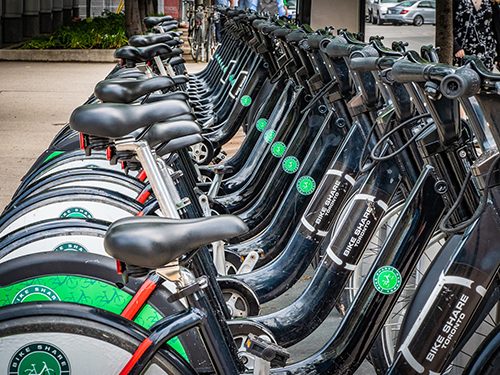 Discounted rates, community outreach, and more docking stations are all helping low-income cyclists, including those in underserved minority communities, gain access to bike-share programs in the United States.

Responding to pandemic-driven increases in the number of low-income riders, bike-share programs across the U.S. are “shifting gears and prioritizing equity,” writes Grist.

Case in point is Philadelphia’s Indego bike-share service, which responded to a recent sharp uptick in low-income riders by introducing income-based discounts. Under its Access Pass system, “anyone with a food stamps card can buy a 30-day Indego pass for US$5, less than one-third the cost of a regular monthly pass.” For residents who don’t have a bank account or a credit card, Indego also offers the option to “pay with cash, using a payment service available in 7-Eleven and Family Dollar stores.”

The program is proving a huge success, with Indego now providing bikes to 100% more Access Pass holders than it did a year ago.

Finding an Indego bike is getting steadily easier, as well, with the service installing more docking stations in low-income neighbourhoods. Those daunted by hills will also be pleased by the planned addition of “hundreds of electric ‘pedal-assist’ bikes, which feature a motor that kicks in when a rider pedals, making riding easier.”

Determined to make bike-shares even more accessible, Milwaukee’s Bublr Bikes “is spearheading a push to include other types of adaptive bicycles.” Today, the organization boasts “21 side-by-side recumbent bikes, upright tricycles, and handcycles in its system of roughly 600 bikes.”

But the effort is still hampered by the pressing issue of funding. “Unlike buses or subways, bike-share services typically don’t receive public subsidies to operate; instead, they mainly rely on private sector investment, philanthropic funding, and a battery of individual grants,” explains Grist.

That makes little sense, for services that are akin to essential public transit. Yet, said John MacArthur of Portland State University’s Transportation Research and Education Center, bike-share systems are still “constantly being forced to show that they are revenue-neutral, or that they can survive on their own.”

The failure to provide public funding for bike-shares in the U.S. has likely one reason the use of such systems has so far largely skewed white and higher-income, Grist says. To maximize ridership, many bike-share companies “first focused on central city areas and dense neighbourhoods with plenty of bus and subway stops.”

Thanks in part to collaborations like the national Better Bike Share Partnership, things are improving, at least among larger bike-share systems, with the majority “actively working to address disparities along economic, racial, and geographic lines.”

“Community outreach is another key approach,” Grist adds, citing efforts by groups like Pacers Bikeshare in Indianapolis, who have been working with local “ambassadors” to model bike use and increase ridership in communities where cycling is less common.

“If residents know neighbours who bike, or see their image reflected in marketing materials, it’s easier to envision themselves using the service too,” said Waffiyyah Murray, manager of the Philadelphia branch of Better Bike Share.