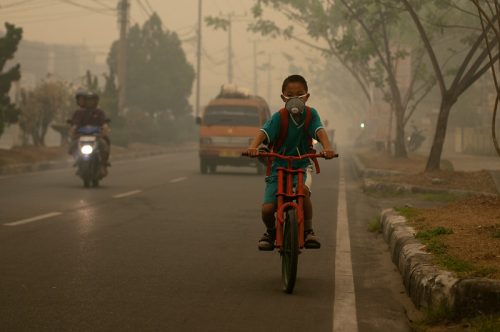 In what Clean Energy Wire calls an “unexpected decision widely hailed as historic,” Germany’s Constitutional Court has declared the country’s 2030 emission reduction targets are insufficient, lacking in detail, and therefore violate the fundamental rights of citizens—including the nine youth climate campaigners who originally launched the case.

“The challenged provisions do violate the freedoms of the complainants, some of whom are still very young,” the court said in a statement. “The provisions irreversibly offload major emission reduction burdens onto periods after 2030.”

The decision is “unexpected and unprecedented” and “will have far-reaching effects,” Clean Energy Wire writes, citing legal experts.

“The Federal Constitutional Court has set a globally remarkable new standard for climate protection as a human right,” said Hamburg lawyer Dr. Roda Verheyen, who represented the youth plaintiffs. “It has recognized the extreme climate crisis and interpreted fundamental rights in a way that is just for present and future generations.”

With national elections coming up later this year, Verheyen added, “legislators now have a mandate to define a coherent reduction path to achieve greenhouse gas neutrality. Waiting and delaying radical emission reductions until later is unconstitutional. Climate action today must ensure that there is still room for future generations.”

“Climate action has been significantly strengthened by the Federal Constitutional Court today,” said Thorsten Müller, head of Stiftung Umweltenergierecht, a German research foundation with a focus on energy and environment law. “So far, we have not had any successful lawsuits for more climate action in German jurisdiction.”

And “if you had asked me before, I would have said that this lawsuit has no chance of success.”

But in the end, “for the first time, a German court has accepted that we have a limited climate budget left and that the constitutional duty to protect future generations is engaged,” said Germanwatch lawyer Hermann Ott. If the effort to mitigate carbon pollution is unfairly distributed over the next three decades, “there may be disproportionate impacts on the fundamental rights of future generations,” he added, and “the court has now recognized this and made it clear to the government that climate debts cannot be postponed.”

“It has become clear that essential parts of the [German] Federal Climate Protection Act are not compatible with our fundamental rights,” added youth complainant Sophie Backsen, who Germanwatch says has already seen the consequences of climate change on the North Sea island of Pellworm, where she lives. “Effective climate protection must start and be implemented now—not in 10 years. This is the only way to secure my future on my home island,” and “the decision gives me a tailwind to keep fighting.”

The ruling “is a clear boost for climate protection” and “gives us tailwind for the difficult tasks that lie ahead,” agreed German Environment Minister Svenja Schulze. “The constitutional court gives the legislature a clear mandate to create clear legal requirements for the path to climate neutrality, even beyond 2030.

She pledged to “present the cornerstones for a climate protection law that is further developed along these lines and creates long-term planning security before the end of the summer.”

Clean Energy Wire says the immediate effect of the ruling is to require German regulators to set carbon reduction goals beyond 2031, no later than December 31, 2022. The court did not mandate annual sectoral targets, nor did it call for any changes in the country’s targets up to 2030.

But “there must be points of reference, that is the core message of this ruling, in order to be able to precisely assess how we get from today to the goal of climate neutrality,” Müller explained.

The decision also requires the government to meet its post-2030 targets “faster and more urgently,” the news article states. “These future obligations to reduce emissions have an impact on practically every type of freedom because virtually all aspects of human life still involve the emission of greenhouse gases, and are thus potentially threatened by drastic restrictions after 2030,” the court ruled.

Youth campaigners welcomed the timing of the court decision, Clean Energy Wire says, with the election now getting under way.

“German parties have swung into full campaign mode for the national election in September, after both the Conservatives and the Green Party presented their chancellor candidates last week,” the Berlin-based publication states. “This also means that a decision on the reform of the climate law will be up to the next government, in which the Greens could play an important role, maybe even providing the chancellor.”

Clean Energy Wire has more reaction to the ruling here.

Now ticks flee the heat by taking to the mountains