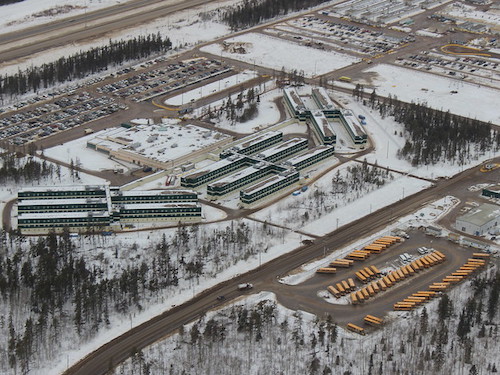 The third wave of the COVID-19 pandemic is hitting the Alberta tar sands/oil sands hard, with 12 active outbreaks at man camps and mining sites across the Regional Municipality of Wood Buffalo, 738 active cases, and a total of 2,054 workers who’d tested positive as of Tuesday.

Wood Buffalo, which includes the town of Fort McMurray, declared a state of emergency, CBC reports, and Health Minister Tyler Shandro said Wednesday Alberta would send a shipment of Johnson & Johnson vaccine to the area. The municipality was reporting 1,064 active cases earlier this week, the highest per capita rate in the province, with its classrooms shut down and its only hospital intensive care unit at capacity.

Those numbers are a major concern for First Nations in the area. “It’s out of control,” said Athabasca Chipewyan First Nation Chief Allan Adam, who attributed the surge in new cases to the number of fossil workers flying in and out of the area.

“I am more worried about our health care system,” Adam told Bloomberg. “If that collapses, then all hell breaks loose.”

Northern Alberta is an area where “much has changed in the span of five months,” CBC notes. “On November 19, 258 cases had been linked to the oilsands. At the time, there were six active outbreaks and 10 active cases,” and since then, fossil operators “have tried to curb the spread onsite, introducing stringent screening protocols and cutting down on movement within the camps.”

CBC says it’s impossible to know the overlap between outbreaks at industry installations and community spread, since Alberta Health tracks case numbers for residents but not the transient workers on the projects. But Premier Jason Kenney connected those dots at a Monday news conference, describing the man camps as a hotspot for infections.

“A lot of that [transmission] appears to have occurred at work camps where people were socializing after hours and not wearing masks, not taking those basic precautions,” he said.

Wood Buffalo Mayor Don Scott “said too many residents, particularly young oilsands workers, have been left unprotected,” CBC writes. “He is calling on the province to lower the vaccine eligibility age for his constituents and provide more details on community spread.” Shandro announced a decision in that direction Wednesday.

Liberals, NDP Close In on Changes to Climate Accountability Bill