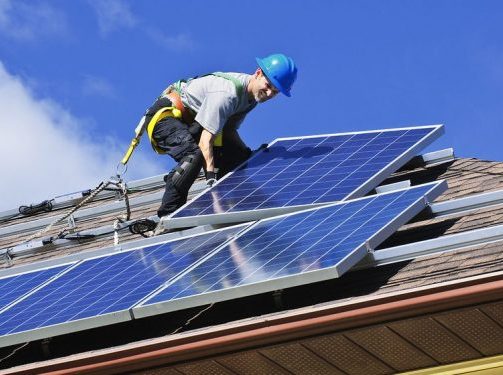 Canada’s biggest private sector union, Unifor, is throwing its support behind calls for a 60% cut in the country’s greenhouse gas emissions by 2030, as long as the more ambitious target comes with a realistic just transition plan for the oil and gas industry workers it represents.

At last week’s virtual Leaders’ Summit on Climate, Prime Minister Justin Trudeau promised faster, deeper carbon cuts adding up to 40 to 45% of Canadian emissions by 2030, just a day after seven climate advocacy groups released modelling that showed how a 60% target would be achievable. The groups cited the higher threshold as “Canada’s fair share on climate action”, backed by a plan that included a doubling or tripling of the federal floor price on carbon.

In the days after the summit, much of the follow-up analysis of Trudeau’s pledge said a 40% reduction was already a heavy lift for the country, with one Alberta energy economist calling the tar sands/oil sands the “emissions elephant in the room”. But CBC reported yesterday that Unifor “agrees with advocacy group Environmental Defence that Canada should go further and aim for 60% its 2005 levels by 2030, provided the right framework is in place to help its 12,000 members move out of the oil and gas sector.”

Unifor representative Joie Warnock “fully expects a transition away from oil and gas is coming any which way,” CBC writes. “What can be avoided, however, is it unnecessarily hurting workers.”

But without proper planning, “what would happen is essentially what is happening now, which is unplanned, unjust transitions. We feel that there should be no involuntary layoffs in the sector,” Warnock said. “We know that there’s an energy transformation happening. Get in front of it.”

That means digging into the details, with the oil and gas work force at the table.

“Our members in the energy sector have a lot to say about the path to decarbonization. The pathway to a lower-carbon economy goes directly through their livelihoods, through their lives, through their communities,” she said. “We’re very concerned that the government hasn’t done the work to plan for a just transition.”

Dale Marshall, national climate program manager at Environmental Defence, told CBC that transition is already under way, and would be better run with government intervention than through an unmanaged process. In March, CBC reported that Alberta had lost 35,000 oil and gas jobs since 2013, and CBC says another 17,500 positions evaporated during the pandemic. Earlier this month, TD Economics warned the transition off carbon will cost Canada up to three-quarters of the jobs that depend directly or indirectly on fossil fuels.

But while the industry talks unabashedly about “de-manning” its operations through rapid increases in automation, some analysis has looked at how to build a transition that works for the fossil fuel work force, and where to focus that effort. In a January assessment commissioned by Environmental Defence, former Unifor economist Jim Stanford reported the industry creates fewer than 1% of Canadian jobs, and is the dominant employer in only 18 of the country’s 152 largest communities, making it “very feasible” to phase out fossil production within 20 years.

Hadrian Mertins-Kirkwood, a senior researcher with the Canadian Centre for Policy Alternatives, agreed that the thing to avoid is an unplanned transition. “What we’ve seen in Canada, we have perhaps more experience with this than many countries, is if you have a resource bust, and we’ve seen this with various natural resources in our history, without adequate support, those communities just disappear and there’s just really unnecessary hardship and destitution,” he told CBC.

In a recent analysis, Mertins-Kirkwood said a transition fund for the Canadian fossil work force should begin at C$16.5 billion per year, with support for training and to create job opportunities in new industries, then decline as the decarbonization process takes hold. His report “proposes a six-part framework for just transition legislation, including benefits for affected workers, a Crown corporation to invest in job-creating projects in impacted communities, a training fund to help historically marginalized groups, and a commission to oversee the whole effort,” CBC writes.

“Giving someone a year of income support is great. But if they have no job at the end of it, all you’ve done is buy time for nothing,” Mertins-Kirkwood said. “So what we advocate for is this idea of a proactive just transition is: create the jobs first and then help people train and transition into them.”

The Trudeau government promised to introduce a Just Transition Act in 2019, and some Canadian climate organizations have been campaigning to keep that pledge in the spotlight. This week, CBC and the Toronto Star both reported that Natural Resources Canada is working on a bill.

“It is the first explicit signal in months that the government still intends to introduce such legislation, which was not mentioned in last week’s budget nor in the government’s updated climate plan last December,” the Star writes.

“Canada’s oil and gas workers helped build this country, and they’ll be the ones to build our low-emissions energy future,” Natural Resources Minister Seamus O’Regan told the paper. “They’re engineers, trades workers, scientists, investors, and more. I want them to have the well-paying jobs they need to lead the way.”