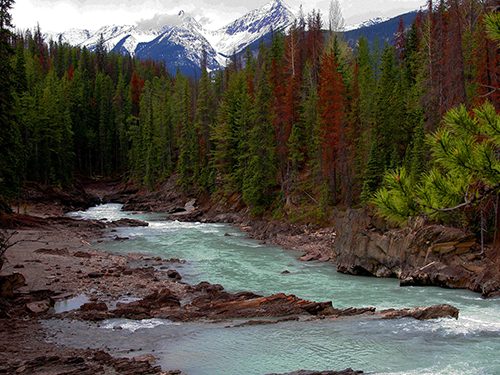 A team of Canadian scientists is about to embark on a five-year attempt to calculate just how much the country depends on the natural world—in economic terms, and in ways that are far less tangible.

“In marshes and on mountain slopes, on farms and fishing boats, a network of researchers…is developing the science of eco-accounting,” writes the Globe and Mail. Lead researcher Elena Bennett, an ecosystem service expert at McGill University, and her fellow sustainability scientists plan to fan out across Canada’s landscapes and waterways (both wild and “working”) in an attempt to put an actual figure on the true value of nature.

“The challenge is not simply to measure the contents of the country’s vast natural landscapes, but to know what to measure,” the Globe notes.

As daunting as the challenge is, Bennett is determined to try. “If we can develop an accounting system that lets us go in and do a census of our natural capital, it’s going to make it so much more apparent how to make better decisions to protect it,” she said.

The urgent need for such an accounting is reflected in the latest federal budget, which has “allocated C$2.3 billion over the next five years to addressing threats to Canada’s ecosystems and reaffirmed plans to conserve an additional one million square kilometres of land and inland waters to meet its target of protecting 25% of the country’s territory by 2025—a step toward a still-larger goal of 30% by 2030.”

Currently orbiting around these commitments is the vexed question of “which areas should be prioritized for protection in order to gain a maximum return on public investments in nature,” the Globe adds.

Enter Bennett’s specialization. The fundamental premise of the field of ecosystem services is that nature is not a thing apart from us, but rather “an essential component of the global economy that delivers raw materials, utilities such as clean air and water, and cultural and psychological benefits without which human civilization would not be able to operate.”

The point, said Bennett, is not to put a price on nature, or “to ask what’s in it for us,” but rather “to better integrate the planet’s life support system into the way society assigns economic value.”

“If we are stewards, then what are we the stewards of?” she asked. “How can we understand when we’re moving closer to or farther away from sustainability?”

Bennett’s ecosystem accounting research into Canada’s natural world will build on a mammoth, groundbreaking report released last February for the UK government. The Globe explains that, over more than 600 pages, Cambridge University economist Sir Partha Dasgupta provided “a meticulous analysis of nature as an asset”—an analysis that outlines how “humanity’s track record of portfolio management has been a dismal one.”

In her effort to help Canadians become better stewards, Bennett and her team will focus on six representative regions that contain not only pristine wilderness, but also what she defines as “working landscapes,” that is, “places where humans and nature co-exist and where scientists say planning decisions should be informed by a clearer picture of the nature side of the cost-benefit equation.” For example, the Globe notes, the Bay of Fundy is surrounded by “tidal marshes converted to agricultural use that now face the threat of sea level rise.”

Team member Aerin Jacob, a scientist who works for the Yellowstone to Yukon Conservation Initiative, told the Globe that Canada needs land use planning “that is using the best available information.”

Alison Woodley, a senior strategy adviser with the Canadian Parks and Wilderness Society, noted that ecosystem accounting at the national level can support the international struggle to combat the twin crises of climate change and biodiversity loss.

“There is a lot of momentum building globally for ambitious biodiversity targets, and that those be better coordinated with action on climate and on healthy ecosystems in light of the pandemic,” she said.

“It really does feel like the last best chance to turn things around.”