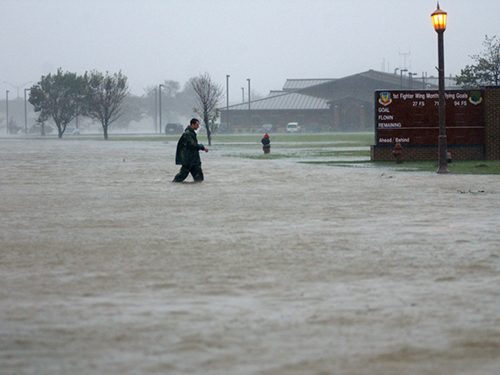 A new study from the University of Oxford suggests the science of extreme event attribution (EEA) could play a powerful role in engaging the public in climate advocacy.

Called “What’s up with the Weather?”, the study explored how the choice of language and visuals can make—or break—efforts to engage a public audience on the connection between climate change and it’s real-world impacts. The Oxford climatologists sought ways to “help catalyze important dialogues about the links between extreme weather and human-driven climate change,” explains the abstract to the report, recently published in the journal Weather, Climate, and Society.

The test audiences for the study consisted of four small online focus groups that met during the summer of 2020. After reading a short text that “explained EEA and highlighted several recent attribution findings showing a climate change influence on the likelihood or magnitude of extreme events around the world,” participants were asked “a series of open-ended questions exploring a broad range of reactions to the material, such as to what extent the information aligned, altered, or conflicted with their beliefs about climate change” and “to what extent they understood EEA results.”

Next, the groups were presented with a range of different types of communication materials—some featuring emojis, others with technical charts and diagrams—and were asked their reactions to the various styles.

Of the 13 participants, 12 responded that the way the EEA information in general connected scientific data with personal observations was useful for climate change communication.

“People who see [extreme weather] portrayed on the news and the media quietly wonder, ‘Is this because of climate change?’” said one participant. “And if that’s a question the attribution studies can help to answer, then that’s a good thing.”

However, the participants were unanimous that those trying to communicate EEA findings would find a much more receptive audience among “those with a scientific background,” the researchers note. The focus groups particularly struggled with “the notion of changing likelihood,” along with the problem of divergent personal experiences and attitudes about weather—for example, how one person’s killing heat wave may be viewed by another as a good excuse to head for the beach.

Critically, participants all reacted negatively to any expression of scientific uncertainty. “It’s really, really tricky for just normal people unless you are just really studying this,” said one participant. Another explained that while they understood scientists could not always offer hard and empirical data without caveats, to people with no scientific literacy, such uncertainty comes across as if “you don’t know what you’re doing.”

As for EEA visuals, while the focus groups showed no preference, “participants unanimously disliked the usage of a boxplot to portray EEA results because it was generally not understood and was disengaging.” (Described by one participant as “clinical,” boxplots allow researchers to graphically display median values and outliers along a continuum.)

Symbols and icons, meanwhile, were unanimously considered worthwhile, but participants agreed the images needed to be wielded with care. For example, depicting a heat wave with a “sun” symbol might weaken the warning, given that associations with the sun are almost universally positive.

Participants also weighed in on emojis, with some praising them as “relatable” while others rejected them as “juvenile” or “patronizing.”

When asked their reactions to EEA results that were accompanied by the broader context of meteorological processes—for example, an added note that global warming makes heat waves more frequent and powerful, or an explanation of the impacts of a more likely/intense weather event—10 out of 13 participants agreed the background material was helpful. Without such detail, EEA results can be “a bit isolated,” said one participant.

“If you give a series of steps—oh well, I know why we’re getting this—so giving a context can be useful.”

In another critical finding, more than seven of the 13 participants reported feeling anxiety, sadness, and “just more despair” in the face of the EEA findings.

“It’s more evidence,” said one participant. “I know the things that I believe are true and this is more proof of that, but again, what can I do about it?…It creates anxiety every time that instead of having a solution, I just have the problems, like a list of things that are going wrong.”

With that in mind, the study authors stressed “the importance of including solutions in climate messages in order to avoid apathy and support feelings of efficacy to fight climate change.”

For those seeking to deploy EEA in climate action advocacy, the Oxford researchers offered four key recommendations. First, “communicators should focus their messages on the concept of vulnerability to extreme weather” by incorporating tangible, on-the-ground impacts and stories. The relatable messaging can help people understand “why this topic is crucially important for human well-being,” the authors explain.

Second, the science of EEA needs to be delivered in everyday language, without academic or technical jargon—for example, choose words like “likelihood,” “intensity,” and “frequency” over “probability,” “magnitude,” or “return time.”

Third, visuals should be “familiar and evocative.” So, no boxplots. The authors add that “pilot testing visuals with target audiences can help ensure they convey intended messages.”

Finally, communicators should embrace the power of “counterfactual” thinking—that is, “the imagination of alternate realities,” the authors explain.

“By emphasizing the role of counterfactuals in EEA studies—modelling virtual worlds with different levels of anthropogenic greenhouse gas emissions—scientists and communicators can demonstrate the impacts of prior societal decisions on today’s environment and how our decisions now shape future risks.”

Describing their experience reading Antoine de Saint-Exupéry’s novel The Little Prince, whose main character visits alternate worlds, one participant said that it was “the parallels between two worlds” that made a powerful impact.

“We are missing out on a world that’s healthy and thriving and I feel quite angry about that,” they said.