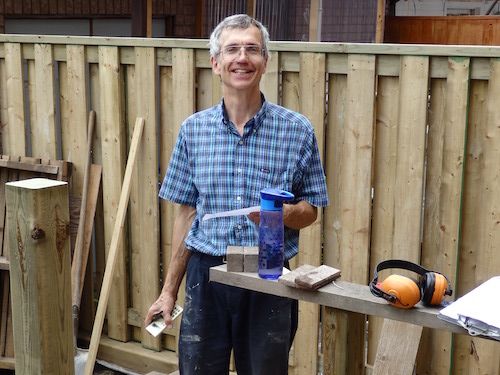 Peter died in hospital of an “acute non-COVID viral infection”, according to an extensive online obituary that traces the milestones of his life—growing up in Peterborough, Montreal, and Buenos Aires, working as a roustabout on a North Sea oil rig off the Scottish coast, and briefly living in an alternative therapeutic community that eventually became Quebec’s first land trust. His work and advocacy touched on areas ranging from tenant advocacy to food security, from green construction to public health, from aviation emissions to bulk transport of freshwater.

He’s survived by his wife Alex Wellington, his sister Anne, and his brother Rob.

“There are no words to express our deep loss of Peter and his never-ending commitment to the issues and concerns we have been working with over the years,” said Peter’s JustEarth colleague and fellow expat Montrealer Dorothy Goldin Rosenberg. “We all benefitted from his valuable passion, knowledge, and research in so many ways.”

“Peter knew so much, cared so deeply, and was always so respectful of others,” said JustEarth member Lyn Adamson, adding that he “held the vision of the world we want and need to leave for those who are young and who will be the agents of change for the future.”

“I am profoundly saddened to learn of Peter’s passing, and I pass on my deepest condolences and sympathy to Alex and his family,” said climate scientist Danny Harvey. “The world is a poorer place with his passing. Peter deeply cared about the world and people, and worked tirelessly to move us in the right direction. He will be greatly missed.”

“We were heartbroken to hear of the death of Peter Shepherd,” wrote Matthew Adams, operations and education director at Passive Buildings Canada, citing Peter’s history as a climate activist, carpenter, and passive house enthusiast as well as his “passion and commitment to building a better world.” Adams added that PBC “would proudly lend our name to the petitions and letters he brought to us—pushing the highest levels of government, in hopes of moving the needle just a little bit more toward sustainability.”

Green economics author Brian Milani, who worked with Peter on the 1990s-era Coalition for a Green Economic Recovery, recalled “how egoless he was despite such knowledge in a broad range of disciplines.” He remembered Peter as “such a passionate learner, seeking ever more technical, ecological, and social knowledge, with a great respect for good science. And yet he could advocate ideas, procedures, materials—even very passionately—without ever getting psychologically fixated on any of these things. There was always a certain innocence and good-spiritedness that was always obvious to people. He was always there to help,” and “a major force behind the scenes.”

“Peter was remarkable on many levels, not the least of which was his exceptional selflessness and concern for the whole of humankind,” added longtime friend Gordon Kogawa. “He has taught me a great deal and continues to do so.”

“I shall always remember him as one of the most cheerful people in the peace and climate change/energy movements,” agreed retired physicist and ecological economy author Derek Paul. “He was always willing to oblige if he could and always had relevant and useful information at his fingertips.”