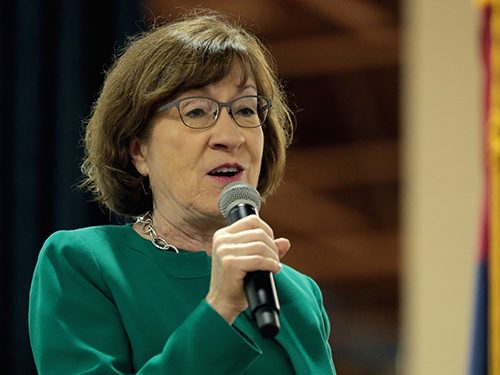 Senate Democrats are pushing to overturn a Trump-era rollback of U.S. regulations on climate-busting methane emissions, and at least one Republican senator is signing on to help them get it done.

Sen. Susan Collins (R-ME) “is now a co-sponsor for legislation that would nix the Trump methane rule by using the Congressional Review Act (CRA),” The Hill reports. The news broke just ahead of a global methane assessment, conducted by the United Nations, that “reflects a growing recognition that the world needs to start reining in planet-warming emissions more rapidly,” the New York Times says.

When the Trump rollback was enacted, the U.S. Environmental Protection Agency (EPA) estimated it would allow fossil operators to emit an extra 400,000 tons of extra methane over a decade. Earlier this month, U.S. President Joe Biden was under pressure to single out methane for significant reductions, even if it meant targeting the oil and gas operations for regulation, to build desperately-needed momentum toward climate stability.

The methane legislation is the Democrats’ first use of the CRA, a law that allows Congress to rescind regulations adopted in the previous 60 legislative days—for practical purposes, in the final months of a former presidential administration, The Hill says. The sweet irony, as The Energy Mix reported after the final composition of the U.S. Senate was known in early January, is that Democrats are relying on a punishing legislative measure first brought into being by Georgia Republican Newt Gingrich in the 1990s, and deployed most avidly by Donald Trump four years ago.

With the Senate split 50-50 between the two parties, the Democrats hold the slimmest of legislative majorities, with Vice President Kamala Harris casting tie-breaking votes in her role as Senate President. The CRA “requires just a simple majority vote,” the Washington-based daily explains, so “Collins’ support means the legislation could still pass” if a Senate Democrat decides to oppose it.

“I have long been a supporter of efforts to reduce pollution and tackle climate change,” Collins told The Hill in a statement. “This resolution would help protect public health and the environment by restoring the tougher standards at EPA that significantly decreased methane emissions.”

And none too soon. The forthcoming UN report “is expected to declare that reducing emissions of methane, the main component of natural gas, will need to play a far more vital role in warding off the worst effects of climate change,” and that methane abatement “will be critical in the short term,” the Times writes.

The assessment “comes as a growing body of scientific evidence has shown that releases of methane from oil and gas production, one of the biggest sources of methane linked to human activity, may be larger than earlier estimates,” the paper adds. It “singles out the fossil fuel industry as holding the greatest potential to cut its methane emissions at little or no cost. It also says that—unless there is significant deployment of unproven technologies capable of pulling greenhouse gases out of the air—expanding the use of natural gas is incompatible with keeping global warming to 1.5°C, a goal of the international Paris Agreement.”

In line with past analysis, the report will point to methane reductions as a quick win in the effort to get climate change under control. “While methane is an extremely potent greenhouse gas, it is also relatively short-lived, lasting just a decade or so in the atmosphere before breaking down,” the Times explains. “That means cutting new methane emissions today, and starting to reduce methane concentrations in the atmosphere, could more quickly help the world meet its mid-century targets for fighting global warming.”

By contrast, “carbon dioxide, the main greenhouse gas, lasts for hundreds of years in the atmosphere. So while it remains critical to keep reducing carbon emissions, which make up the bulk of our greenhouse gas emissions, it would take until the second half of the century to see the climate effects.”