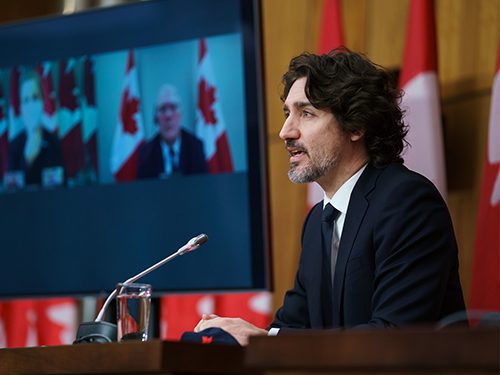 Prime Minister Justin Trudeau committed Canada to a 40 to 45% reduction in its greenhouse gas emissions by 2030 yesterday, in an address to the Leaders’ Summit on Climate convened by U.S. President Joe Biden and Vice President Kamala Harris.

The Trudeau government arrived at the figure after the U.S. “made it clear that a target of less than 40% would be frowned upon,” CBC reported Wednesday, citing a Radio-Canada report. That same day, modelling released by seven climate and environment organizations showed how Canada could cut its emissions 60% in the next decade, a threshold the groups cited as “Canada’s fair share on climate action”.

After years of promising that the country’s Paris Agreement target of 30% by 2030 was a “floor”, not a “ceiling” on Canada’s climate ambition, Trudeau told the White House summit the country is “now on track to blow past our old target,” with emissions falling to 439 megatonnes this decade. “He conceded it may be tough for Canada, a major energy producer, to cut emissions so deeply, but he said all countries must rise to the challenge,” CBC writes.

“Our priority continues to be battling COVID-19. We rely on science to save lives and develop vaccines but we must also listen to climate science, which tells us we’re facing an existential threat,” Trudeau said.

“We must take action now because there’s no vaccine against a polluted planet,” he added.

“I think Canadians would say, ‘OK, you demonstrated an ability to actually provide a plan to get a long way, but there’s nine years to go before 2030 and we know from a science perspective we need to do more,'” he told CBC ahead of Trudeau’s announcement. “They would say, ‘OK, you don’t necessarily know exactly how you’re going to get there for that final small piece, but we expect you and future governments are going to stretch. You are going to have ambition, you are actually going to make investments next year and the year after and the year after that, to ensure that Canada is doing its part.'”

Conservative leader Erin O’Toole rejected the higher target, telling the Globe and Mail a Conservative government would stick to the 30% goal the country adopted and 2015, and that his own brochure-style climate plan embraced last week. NDP leader Jagmeet Singh called for a 50% reduction from 2005 levels, while Green leader Annamie Paul supported 60%.

Canada Shouldn’t Be ‘Back of the Pack’

“Not only is this worth doing, Canadians will be better off,” Environmental Defence writes on the landing page for the release. “Household energy bills would fall; there would be more good, green, stable jobs; communities would be healthier; and there would be a lower risk of extreme weather events fuelled by increasing carbon emissions in the atmosphere.”

The groups’ six-page summary of the more detailed modelling stresses that the policies and technologies are available to make a target of 60% by 2030 achievable. In the Navius scenarios, jobs, investment, and economic performance “remain strong”. Household energy costs go down despite a “sharply rising carbon price”, as homes and vehicles become more energy-efficient and clean energy replaces fossil fuels.

“Policies that restrict the production and use of fossil fuels are critical and, if implemented, a significant part of the transition away from fossil fuels would be completed by 2030,” the groups write. “Counterintuitively, economic growth in Alberta would remain higher than the national average despite the oil and gas sector shrinking considerably. That is because the Albertan economy is more diversified than most people think, and an economic and energy transition away from fossil fuels involves investment in many growing industries.”

News coverage leading into the summit painted a picture of a federal government that has worked hard to present itself as a climate leader, but is rapidly falling behind as other countries pick up the pace in their response to the climate crisis.

“If in fact the U.S. announces a 50% (target)…that really dramatically increases the pressure on Canada to up our game,” University of British Columbia political scientist Kathryn Harrison told the Toronto Star in the lead-up to the summit. “They expect their trading partners to match their ambition, and the U.S. is our biggest trading partner by far.”

“Canada’s new 2030 emissions reduction target is stronger than its previous commitment, but it falls short of what is needed to avoid dangerous levels of warming,” Helen Mountford, vice-president of climate and economics at the World Resources Institute, warned in a release. “The target also lags behind new commitments from peers like the United States, United Kingdom, the European Union, and Japan.”

Mountford added that Canada “should not be the back of the pack in the fight against climate change. Canada’s efforts to deliver real action on the ground are welcome, like placing a price on carbon pollution, but the country should aim for a much more ambitious goal than what it put forward today.”

The New York Times ties the disconnect back to Ottawa’s stubborn allegiance to the Alberta tar sands/oil sands industry. “Canadian officials insist that Mr. Trudeau’s policies simply need more time to work,” the paper writes, referring to the emissions increase in the 2019 inventory report. “But environmentalists counter that Canada can’t reduce emissions without reducing oil production from the sands.”

The nub of the problem is that, “as one of the world’s largest oil reserves, the oil sands are also among the most polluting, given the amount of energy required to extract it. But it’s unlikely that Mr. Trudeau would end production there,” the Times adds. “The oil sands are integral to the economy of the western province of Alberta [though not nearly as integral as people seem to think—Ed.]. If Mr. Trudeau or any other Canadian politician declared them obsolete, the political backlash would be overwhelming.”

But that means “there’s a disconnect, at least on the international stage, between Canada’s reputation on climate and the reality of action on the ground,” CAN-Rac Executive Director Catherine Abreu told the Times. “We really have to stop selling ourselves that perhaps comforting, but dangerous, lie that there is room for the oil sands in the future.”

Greenpeace Canada Senior Energy Strategist Keith Stewart made the same point in a pre-summit interview with the Star. “The way you stop climate change is you stop burning fossil fuels, and anything else is fooling yourself,” he said.

In that same news dispatch, Wilkinson assured the Star that “our intention is to be very ambitious and to push as far as we absolutely can,” but his phrasing skipped the part about phasing out fossil fuels. He said he agreed Canada needs to start seeing emissions reductions from “all sectors of the economy,” adding that clean fuel regulations, the national carbon price, and zero-emission vehicle incentives will make that happen in the fossil sector.

“The faster we can go with respect to transportation, zero-emission technologies, the faster we will see the reduction in emissions from the oil and gas sector,” he said.

The new target produced a cascade of reaction from climate groups, all of them welcoming a higher emissions reduction target but declaring that Canada needs to do more.

“It’s good to see Canada driving up ambition and it’s not enough,” Abreu said, adding that she hoped to see the country toughen its target in the years ahead and in negotiations leading up to the next United Nations climate conference, COP 26, in November. “Canada is an energy exporting nation and that is one of the country’s main barriers to climate ambition. Canada’s new NDC [its Nationally Determined Contribution under the Paris Agreement] should address emissions from oil and gas production, ban fossil fuel subsidies, and enshrine just transition legislation.”

“Canada was once a climate leader,” said Leadnow Executive Director Sophie Theroux. “We can be again, but only if this government has the courage to acknowledge that we cannot reach our climate commitments so long as we rely on fossil fuels for jobs and our energy needs. Any successful climate plan must include massive investment in supporting oil and gas workers to transition to a clean energy economy.”

UN declares 2021 is ‘year for action’ on climate