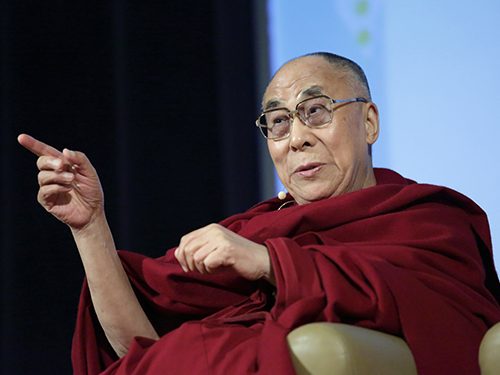 The Dalai Lama was among the signatories to the letter, which was addressed to U.S. President Joe Biden just hours before he opened yesterday’s Leaders’ Climate Summit, reports The Guardian. The Fossil Fuel Non-Proliferation Treaty Initiative letter asks governments “to commit to a rapid and just transition away from fossil fuels, and [to] a ‘transformational plan’ to ensure everyone around the world has access to renewable energy.”

On its website, the initiative notes that, “with 17 major economies responsible for 80% of global emissions and global GDP represented, the Leaders’ Climate Summit could be a critical milestone toward global cooperation between the Global North and Global South at COP 26,” scheduled for this November in Glasgow.

Describing the climate crisis and its “commensurate destruction of nature” as “the great moral issue of our time”—with fossil fuel consumption the biggest contributor to that issue—the signatories add that “leaders, not industry, hold the power and have the moral responsibility to take bold actions to address this crisis.”

The Guardian says environmental groups and think tanks from across the globe are backing the letter, and have sent their own collective missive to political leaders, urging them to recognize that the Nobel initiative “echoes the call of billions of people across the world for fast and fair action on the climate crisis.”

Citing the United Nations Environment Programme’s Production Gap report, CNN writes in its own coverage of the laureates’ plea that even though Paris Agreement targets require the world “to cut fossil fuel production by roughly 6% every year between 2020 and 2030,” that production is actually still increasing, at a projected rate of 2% per year.

At such a rate of increase, “the world is on track to produce 120% more fossil fuels by 2030 than scientists say is permissible to keep the planet from warming by more than 1.5°C, and 50% more than we can burn to keep warming to 2°C.”

Some members of the Fossil Fuel Non-Proliferation Treaty Initiative also provided individual statements, including Williams, who urged world leaders to frame the climate crisis not as a national security issue, but as a threat that knows no borders. “The impacts of climate change on communities, families, and individuals are far reaching,” she said. “And with fossil fuels responsible for 80% of warming, governments need to be bold and stop fossil fuel expansion in the name of human security.”

Bangladeshi Muhammad Yunus, who won the 2006 Nobel Peace Prize for his work on microcredit, declared that the world has all the tools it needs to prevent the climate crisis from victimizing the poor. “The technology exists, the desire from the people exists, and the world waits on heads of state to act,” he said. Iranian human rights activist Shirin Ebadi echoed the idea that the crisis knows no borders, saying that “the realization of these rights is the responsibility of every single nation.”

The Nobel signatories call out the Paris Agreement itself, noting that it is studiously silent on the connection between the climate crisis and fossil fuels. While banks across the world “continue to fund new projects,” they declare, the continued expansion of the fossil industry has become “unconscionable.”

“The fossil fuel system is global and requires a global solution—a solution the Leaders’ Climate Summit must work towards,” the laureates declare. “The first step is to keep fossil fuels in the ground.”