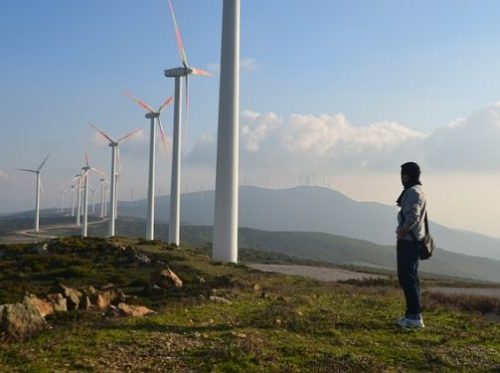 In energy-centric Houston, the scuttlebutt around most office coolers is not the fading fortunes of fossil fuels, but the rising star of renewables—with the exception of how that star might intersect with carbon capture ventures.

“A year ago, talk in the Texas energy hub was mostly about defending oil and gas and denouncing renewables,” reports Bloomberg. Today, however, finds much conversation in the heart of the Texas oilpatch tuned in to all things clean energy.

That, at least, is the opinion of John Arnold, a former Enron natural gas trader now turned billionaire philanthropist. Arnold took to Twitter last week to declare a “seismic shift in the Houston energy industry of late.” In the past, he said, three-quarters of industry conversation was given to oil-and-gas matters, with the remaining quarter going to renewables. Today, “it feels like those numbers have reversed.”

According to Bloomberg, Arnold ascribes this shift in conversation to the financial markets, “which have no interest in oil production growth anymore.”

“The markets are rewarding those in a growth industry (zero carbon energy) vs one in secular decline,” he wrote.

Noting that rapid decarbonization “requires enormous scale and financial resources that large companies possess,” the one-time head of natural gas derivatives at Enron Corporation asserted that “the fossil fuel industry has that expertise and is now focusing on a low-carbon future.”

He said examples of the industry moving toward that low-carbon future abound—though often toward its own version of “decarbonization”, rather than a renewable energy economy. Case in point: Bloomberg highlights a recent proposal floated by colossal fossil ExxonMobil to build a US$100-billon carbon capture hub somewhere along the Texas Gulf Coast.

Echoing Arnold’s picture of a “seismic shift” in attitude, Houston Mayor Sylvester Turner told Bloomberg that Exxon’s proposal is just one example of hydrocarbon companies realizing which way the wind is blowing. “The recognition that we can’t continue to do business as we have done it in the past is sinking in,” Turner said.

As Bloomberg Green explains in an earlier report, Exxon’s proposed carbon capture “hub” would be the largest in the world, with early projections showing that, by 2030, it could be burying 50 million tonnes of CO2 under the Gulf of Mexico every year.

As for who will foot the hefty bill for this attempt at shifting Exxon’s carbon ledger, Bloomberg says the fossil giant has warned “that government funding would be required to pay for and develop it.”